Grapevine Pruning with an Emphasis on Vineyard Establishment - News 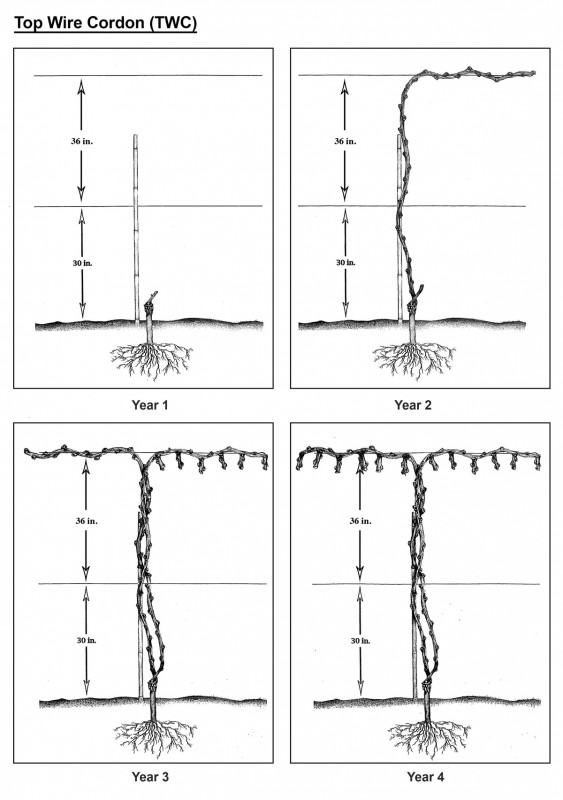 Entire textbooks (or chapters of textbooks, anyway) have been devoted to the topic of pruning, training, and trellising grapevines.  This article will provide a brief overview of the main concepts of pruning grapevines, with emphasis on pruning during vineyard establishment.

Dormant grapevine pruning during vineyard establishment is performed annually with two main goals in mind – training the vine to the desired configuration on the trellis, and building vine reserves to support a grape crop in the future.  Crop control is a third goal of pruning once vines are established, but early vine development should not be sacrificed for small crops in the early life of a vineyard.  Once a vineyard is mature, pruning is used to limit crop size by producing fewer clusters with larger berries and higher quality potential.

Once a vineyard is planted, the single most time consuming vineyard operation is pruning.  Pruning is described as the act of removing parts of a plant, and is performed annually (at least) with the goals of regulating crop size and affecting the location and amount of vegetative growth.  The term “pruning” in this article refers to dormant-season pruning, not summer pruning or hedging that is used to optimize fruit exposure with Vertical Shoot Positioned (VSP) training systems.

Used in conjunction with pruning, training is the act of shaping the vine by arranging it on a trellis.  The choice of training system will have a large effect on the way the vine will be pruned.  The following figure from Cultural Practices for Commercial Vineyards1 describes four training systems, illustrates how a grower should prune vines when using the Umbrella Kniffen training system (a-c), and how the vine should look when mature (g).  Although the position of vegetative growth will change with training system, I chose this illustration to present the concepts of pruning during the establishment of a vineyard and will be referring to it throughout this article.  The entire text of Cultural Practices for Commercial Vineyards can be found at: http://ecommons.cornell.edu/handle/1813/17318

Depending on how the vine was treated in the nursery, it will have a few to several buds.  The primary goal in the establishment year is to grow a healthy root system, and the previous illustration indicates one way to accomplish that.  Figure (a) shows the vine after planting and pruned to two shoots or buds.  The idea of restricting growth to only a few buds is to concentrate the energy of the vine into only a few growing points so at least one shoot will develop into a cane that can be selected for growth the following year.  These shoots can originate from the base of the vine and do not need to be tied to a wire, but some method of training is usually desired to keep the vine from sprawling on the ground.  Bamboo stakes can be used to help train the shoots upwards, and plastic grow tubes are often used to protect the young growth from damage caused by animal feeding, chemical herbicides, or mechanical cultivation.  Controlling weed growth to limit weed competition around young vines is especially important in the year of planting, and any clusters that set fruit should be removed in order to direct plant reserves to the root system.

The goals in the year after planting are to begin training growth to the desired training system  and to continue to build vine reserves to support at least a partial crop in Year 3.  This is typically done as shown in Figure (b).  Vines are pruned to a single cane that will produce 6-12 healthy shoots.  If pruning to a high wire training system, the single cane can be tied to the high wire, if possible, and shoots growing on the lower portion of the cane can be removed by hand.  A second trunk can be initiated by retaining a “sucker” shoot near the base of the vine.  Double trunking (maintaining two trunks per vine rather than a single one) is usually preferable in case one of the trunks needs to be replaced due to injury from winter freeze damage or other causes.   If pruning to a low wire training system such as Vertical Shoot Positioned (VSP), then prune to the bud below the fruiting wire and secure to the wire.  Shoot growth in Year 2 should begin to fill the trellis space allotted to the vines.  Any fruit that develops is usually removed by flower or fruit cluster thinning, as leaving more than an occasional cluster for identification purposes is counter-productive because the fruit will compete with vine reserves needed to develop the root system.

The desired shape of the vine should be achieved during the third growing season, and a healthy vine should be able to produce at least a partial crop.  Fruiting canes tied to the trellis become the “semi-permanent” structure of the vines depending on the training system employed.  If not already accomplished, a second trunk should be established.

Generally speaking, fourth year and older vines should be capable of producing a full crop.  A training system should be selected appropriate to the variety.  Native American vines (especially) have large leaves and a drooping growth habit, so high wire training systems such as Hudson River umbrella, or other top wire systems, are generally used for them.  On the other hand, vinifera cultivars generally have smaller leaves and upright growth habit, so they are more suited to low wire training systems such as Vertical Shoot Positioned (VSP).  For a schematic depiction of top wire cordon (TWC), umbrella kniffen (UK), vertical shoot positioned (VSP), and Geneva Double Curtain (GDC) training systems, please visit this web site at Ohio State University2:

Vines are pruned anytime they are dormant.  Cold-tender varieties are usually pruned in the spring so that extra buds can be retained to compensate for buds that did not survive the winter.  Some growers use a “double pruning” system whereby vines are pruned and brush is pulled, but extra buds are left in case there has been winter damage.  In this case final pruning can be done at bud swell; however,  canes removed during pruning are best removed from the trellis when the vines are dormant to minimize shoot breakage while pulling brush.

How many buds do I leave?

Dormant pruning is the primary means of regulating crop size.  Vines pruned too lightly (leaving too many buds) run the risk of producing a high yield of inferior quality fruit that will make inferior quality wine.  Vines pruned to too few buds will reduce crop unnecessarily and vine growth will tend to be overly vegetative and vigorous.  Researchers have developed the method of “balanced pruning” in order to balance vegetative growth with desired yield of mature fruit, and is a system that adjusts the number of buds retained at pruning according to vine size and specific to variety.  Labruscana (native American) varieties tend to have relatively low crop potential per retained bud, so more buds are generally left after pruning (50-60 buds per vine or more might be necessary to produce a moderate yield of 5-6 tons of fruit per acre).  Many hybrid varieties have large clusters and fruitful base shoots, so fewer buds are retained.  In some cases (Vidal and Seyval, for example) fruitfulness is so high that dormant pruning alone does not always limit crop to a desired level, so sometimes clusters are thinned during the growing season.  Many hybrid and vinifera varieties are pruned to 3 to 5 buds per foot of row to produce the desired crop level; for example, vines planted at 6’ intervals between the vines are pruned to 18 to 30 buds per vine.

Suggested pruning formulas for various grape cultivars can be found in the Midwest Grape Production Guide at:  http://ohioline.osu.edu/b919/0008.html