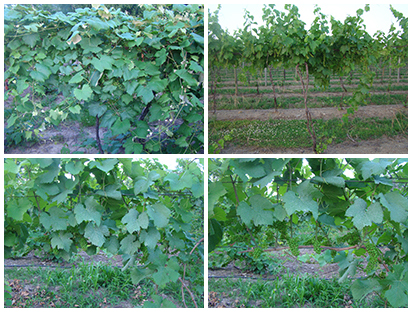 The production of large crops of high quality fruit requires that grapevines be pruned and trained to produce a large area of healthy leaves exposed to sunlight.  Many different training systems have been developed to meet this goal; please see a previous article on the topic, found here: https://doubleavineyards.com/news/2012/01/31/grapevine-pruning-with-an-emphasis-on-vineyard-establishment/ .  Depending on the training system employed, additional canopy management measures may need to be used to maximize fruit and wine quality by optimizing fruit ripeness and minimizing the occurrence of fruit bunch rots.  This article will discuss the need for summer canopy management for two popular training systems, Top Wire Cordon (TWC) and Vertical Shoot Positioned (VSP), and canopy management techniques used for VSP.

Commercial vineyard training systems have evolved that maximize the production of high quality fruit with minimum labor input.  For example, in the Eastern United States, ‘Concord’ growers have largely adopted a bi-lateral Top Wire Cordon system referred to locally as “No-Tie” (Top Left).  Two trunks per vine are trained to a top wire, and semi-permanent cordons are established on the wire.  Several one year-old canes, usually 5-8 buds long, are retained in order to reach the desired bud and shoot number.  Once the vines are established and vines are pruned, there is usually no summer canopy management employed (Top Left).

Top Wire Cordon training systems are extremely efficient and should be used where appropriate.  Many native varieties with procumbent, downward growth habits, and even some hybrid varieties with semi-upright growth habits, are well-suited to TWC.  The top right photo shows a ‘Vidal’ vine trained to TWC in a highly productive vineyard in western New York.  ‘Vidal’ has a relatively loose cluster with thick-skinned berries, making it fairly resistant to bunch rots, and cluster exposure to sunlight does not necessarily improve wine quality in this variety.

Unfortunately, top wire cordon systems are not well-suited to grow many varieties, especially vinifera, in the humid and variable climate of the eastern United States.  Vertical Shoot Positioned (VSP) training systems are much better suited for varieties where fruit exposure to sunlight is critical in order to maximize fruit and wine quality and to minimize fruit rots that can have adverse affects on wine quality.  Successful grape production on VSP systems requires the use of several canopy management techniques that are all labor-intensive compared to TWC systems.  These include shoot thinning, shoot positioning, shoot topping (referred to as “summer pruning” or “summer hedging”), and leaf removal in the cluster zone.  Ideally, each operation is timed to be effective and efficient in order to reduce labor inputs.

Shoot thinning is used in VSP training to regulate shoot density and crop load.  Ideally, 3 to 5 shoots per foot of row are retained at even spacing.  Unproductive shoots should be removed and shoot crowding should be avoided, especially at the “head” area of the vine.  Shoot thinning is best done after the risk of spring frost is over; shoots 4-6” long can easily be removed by hand whereas longer shoots may need to be pruned off with shears, a much more time-consuming task.

VSP training requires the use of two or (preferably) three pairs of catch wires above the fruiting wire, which is usually placed 36” to 42” above ground level so that shoots can be trained in an upright position.  Upright spurs on spur-pruned vines, or upright-growing shoots on cane-pruned vines, facilitate natural growth between the sets of wires, but some hand shoot positioning is also needed.  This can be done most efficiently by making several passes through the vineyard to move the shoots between the sets of wires, starting when the first shoots are long enough to be placed between the first set of catch wires.  Additional passes are made until the majority of shoots have been positioned between the uppermost set of catch wires.

Ideally, once the shoots emerge through the top set of catch wires, they will stop growing.  This is not always achievable in our climate, since summer rains can encourage continued shoot growth beyond the desirable length.  If shoots become too long, they will droop over the top set of catch wires and cause undesirable shading of the fruit zone.  This can lead to reduced sunlight exposure in the fruiting zone and cause reduced fruit quality, increase the incidence of disease in the fruit clusters  (especially powdery mildew and botrytis), and reduce bud  fruitfulness in the following year.  In very small vineyards, summer pruning can be done by hand, but usually it is done by hedging the canopy about 6-8” above the top set of catch wires.  Depending on vine growth, summer hedging may need to be done several times per season.

In addition to the techniques described above, leaf pulling is often used to maximize wine quality.  Red varieties, especially, can benefit from fruit exposure to sunlight to improve fruit chemistry.  Varieties that are prone to fruit rots (most vinifera varieties fit in this category) benefit from increased air flow around the clusters, which improves drying time after rainfall and also improves fungicide penetration into the canopy and onto the fruit where it is needed.

How much leaf pulling is needed, and when and where, depends on variety and climatic conditions.  Red vinifera growers in hot, sunny climates often pull leaves only on the “shade” side of the canopy (east side of north-south oriented rows, or north side of east-west oriented rows); growers in cooler, cloudier locations may pull leaves on both sides.  Some white varieties can be especially prone to sunburn, so growers often pull leaves only on the “shade” side of the vines, at least initially, but may do some additional leaf removal on the “sun” side later in the season when days are shorter and sunlight intensity is less.  Leaves should only be removed to the extent that their removal aids in fruit exposure, without compromising vine leaf area needed for fruit ripening and bud development for the following year, so should be restricted to the fruiting zone.  Generally speaking, leaf removal should be performed soon after fruit set in order to maximize the benefits of the practice.  The bottom left and right photos show ‘Pinot Gris’ on shoot thinned, shoot positioned VSP, before and after appropriate “shade side” leaf pulling at fruit set, respectively.  All photos in this article were taken on June 21, 2012, about 2 weeks after grape bloom.

For additional reading on this topic, I refer you to Chapter 6 “Grapevine Canopy Management” in the Wine Grape Production Guide for Eastern North America (Andrew Reynolds and Tony Wolf), and Sunlight into Wine:  A Handbook for Winegrape Canopy Management (Richard Smart), two excellent resources for the serious grape grower.