Dealing with Yellow Jackets in the Vineyard - News 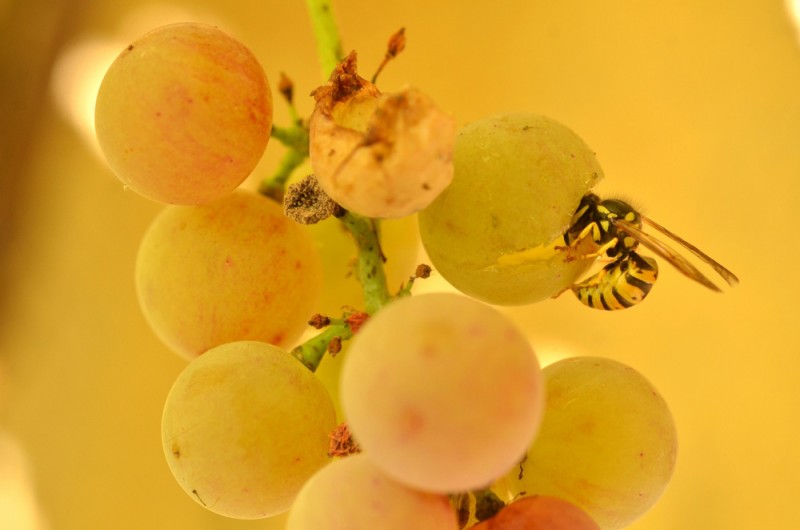 This month’s article is inspired by several e-mails and phone calls received over the past few weeks from all over the country regarding yellow jackets in vineyards and how to control them.  Unfortunately, there are no easy solutions to this group of insects, and they can pose a stinging hazard, especially to workers harvesting ripe fruit in the vineyard.

Despite their “anti-social” reputation, many bee and wasp species are social insects with organized colonies.  Social wasps include yellow jackets, hornets, and paper wasps, and they all build paper combs called “cartons”.  Depending on the species, nests can be built in natural cavities in trees, underneath awnings, in crevices such as in metal vineyard posts, and also in underground rodent burrows.  Populations increase during the summer so that by late summer, a colony may contain several hundreds or thousands of individuals that will aggressively defend their nests from intruders.   Photos of yellow jackets, bees, and wasp species can be found in references listed at the end of this article.

Yellow jacket colonies are started in the spring by a single mated queen that has survived the winter.  Queens begin the colony by gathering wood pulp used to create the first cells for the nest.  Eggs are laid and the queen provides for the first brood of workers.  Once the workers emerge as adults, they take over the tasks of nest expansion, brood care, and foraging, while the queen spends the rest of her life laying eggs.  Colonies grow through the summer and, as mentioned, can reach hundreds or thousands of individuals.  Early in the season yellow jackets prey mainly on other insects to provide protein for developing larvae.  Once the colony is well established, yellow jackets turn to sugar as the primary food source, and ripening grapes can be an attractive source of food.

MANAGING YELLOW JACKETS IN THE VINEYARD

Managing yellow jackets in the vineyard can be a difficult task  To some extent, once the problem exists it can be very difficult to deal with.  Prevention can be the best solution.

Limiting the availability of attractive food sources in and around the vineyard can help reduce yellow jacket populations.  Fallen fruit from vines and other fruit crops should be removed from the vineyard when possible.
Trapping individual yellow jackets can reduce their population to some extent.  Traps containing food-based attractants are commercially available, and there are several homemade trap designs that can be found on the internet.  Google “homemade yellow jacket traps.”

Yellow jackets feed during the day and their nests can often be found by following individuals back to the nest.  Before attempting to destroy a nest, carefully consider the consequences and circumstances.  Recall that honeybees have a detachable stinger, so can only sting once.  Yellow jackets have a retractable stinger that can be used several times, and dead or injured insects can release pheromones that attract other insects from the same nest.  Protective gear should be worn, and individuals allergic to bee stings should not conduct this work.  Professional exterminators are available in many locations.

Broadcast insecticide applications are not recommended to control yellow jackets as they are ineffective, and most insecticides cannot be used for this purpose.  There are, however, many commercially available insecticide products that can be used when directed at individual insects or at the entrance to a nest.  Applications to the nest should be performed at night, when the insects are in the nest, and are best done when air temperatures are cooler and the yellow jackets are less active.

Finally, if yellow jackets pose an annual problem in your vineyard, consider trapping them in spring and early summer when colony populations are lower.  Trapping in early spring can eliminate the queens responsible for establishing new colonies.  Food-based traps can be effective in eliminating small numbers of insects, but the attractant needs to be kept fresh by replacing on a regular basis.