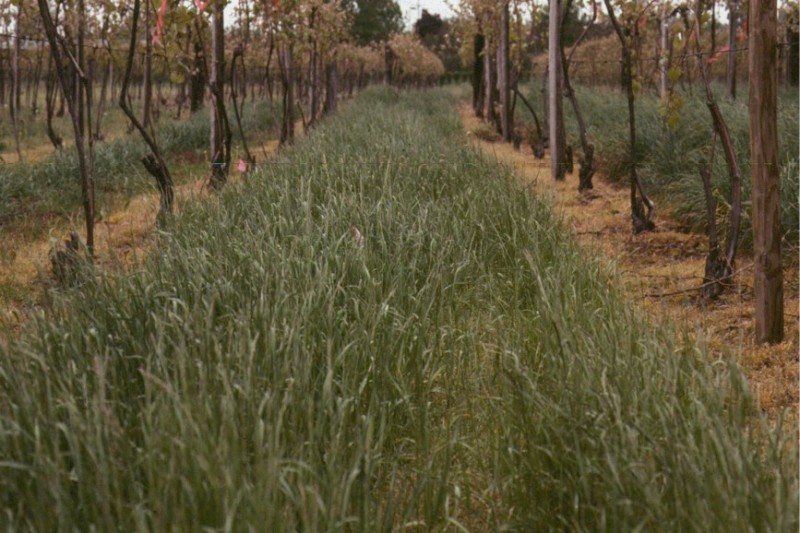 Cover crop management is an important consideration in viticulture. Most vineyards are managed with some kind of ground cover in the row middles, while minimizing weed competition near the vines. There are many benefits from growing cover crops in row middles. These include reduced risk of soil erosion and improved soil fertility, as well as health, and structure, and improved footing for operating equipment (especially soon after rainfall). Cover crops are also used to compete with grapevines to reduce excessive vegetative growth, but because both weeds and cover crops compete with grapevines for water and nutrients, an area within the rows is generally kept free of weeds. This is most important in young vineyards when vine roots are becoming established. Once the grapevines have fully developed root systems, weed and cover crop growth can be used to substantially regulate vine growth.

Perennial grasses are commonly used as vineyard cover crops because they are most apt to withstand traffic from vineyard equipment and can tolerate mowing throughout the growing season. Some commonly used species include Kentucky bluegrass, orchardgrass, perennial ryegrass, and various fescues. All of these cover crops can produce dense stands that choke out undesirable weed species, and they usually need to be mowed several times per year. Creeping fescues, as their name implies, have a creeping growth habit that can fill in bare areas, so they may need to be managed with the use of a systemic herbicide such as glyphosate to minimize growth underneath the vines.

There are at least two ways to establish a permanent cover crop in a vineyard. Some growers establish the cover crop first, and then use a systemic herbicide to kill strips in which the vines are then planted. Alternatively, final ground preparation can be made in the spring prior to planting the vines and then seeding the cover crop into the row middles. Seeding is usually most effective in the spring when soil moisture is adequate for seed germination. If a permanent cover crop is not established in the year of vineyard planting, an annual cover crop such as annual ryegrass can be planted in the fall and then killed by cultivation or with herbicide the following spring, at which time a perennial species can be planted.

There are situations in which competition from cover crops in undesirable. The Eastern US ‘Concord’ industry typically uses a single annual application of systemic herbicide in the row middles, applied in late spring prior to grape bloom. Cover crop studies performed by Cornell University (Alan Lakso and Robert Pool) have shown that any actively growing ground cover during the post-bloom period reduces vine size and yield. [1] In another study, cover crops of various widths were established, and vine size and yield was strongly reduced proportional to the amount of competitive sod. [2] In the Eastern U.S. ‘Concord’ industry, vines are typically own-rooted, and vine size strongly affects crop size (big vines make big crops), so increasing vine size by minimizing weed and cover crop competition is desirable.

For vineyards in arid regions with low summer rainfall, balanced vine growth and improved fruit and wine quality can be achieved using regulated deficit irrigation to devigorate vines by increasing water stress after fruit set. Using careful irrigation management, shoot growth is stopped prior to veraison without excessively stressing the vines, followed by small additional irrigations as needed to maintain leaf function and fruit development during ripening. In addition to direct improvements in fruit quality, other benefits include improved control of diseases and insect pests, which is achieved by facilitating a more open canopy that is less susceptible to pathogens, and by promoting better penetration with chemical sprays. In red varieties, increases in phenolics and tannins can lead to improved flavor and complexity of the wine. [4]

For vineyards in humid regions with higher summer rainfall, induced water stress is more difficult to obtain due to variable patterns of precipitation, but water stress can be obtained through increased root competition. Smart and Robinson describe two methods to accomplish this – increasing vine density (a decision best made prior to planting the vineyard) and between-row cover crops.

Cover crops compete with the vines for water (especially) and nutrients and limit vine root development. Cover crops should be managed as much as possible to devigorate vines to the desired extent without imposing too much drought stress that could reduce fruit ripening or cause premature defoliation (thus making the vines more susceptible to winter injury). In a wet growing season, cover crops can be allowed to infringe on the weed control band under the trellis, and low growing weeds like crabgrass can be allowed to grow to encourage more competition with the vines. In dry seasons, cover crop and weed growth can be controlled using post-emergence herbicides, but in severe drought seasons supplemental irrigation is the best method to ensure that vines do not run out of water completely.

Cover crop management is a necessary component of successful vineyard management. Ground covers are essential to maintaining and improving soil health, thus benefiting the health of the vineyard; cover crop and weed growth can be managed to influence vine growth and canopy characteristics, crop size, and fruit and wine quality in humid growing regions.