The Use of Grow Tubes in Vineyard Establishment - News 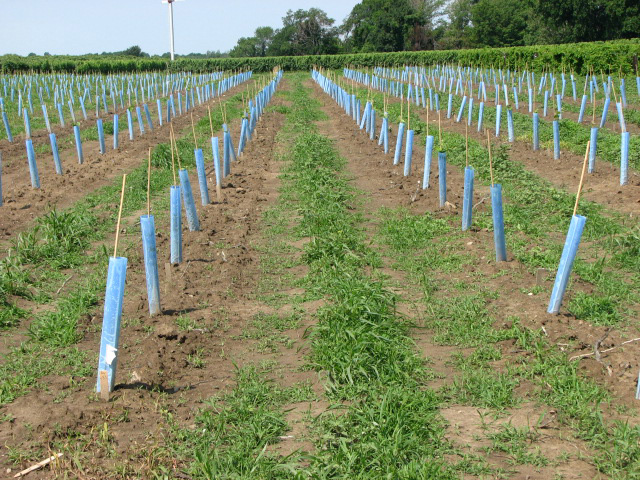 The use of grow tubes in vineyard establishment has become popular in the past decade or two. Obviously, vineyards have been planted for thousands of years without the use of plant shelters, but the tubes do provide some positive benefits. This article will summarize some research on grow tubes as well as our experience in western New York.

Grow tubes vary in shape, size, and color, and are placed around newly planted grapevines. Support is usually provided with a stake such as a bamboo pole. Manufacturers make various claims, including an increase in first year vine growth and the potential for earlier cropping or increased crop size in the first few years after planting. The positive growth response is attributed to the greenhouse-like environment inside the tube that promotes rapid shoot elongation, especially early in the season when all the vine growth is inside the shelter. Some manufacturers claim positive growth attributes due to the color of the tube and the positive effects of transmitted color on plant growth.

Many University studies have been conducted on grow tube use. Most research does agree with claims of an increase in early-season shoot growth attributed to the use of grow tubes, but support for some of the other manufacturer claims is lacking. For example, research in the Midwest has not shown an overall increase in vine growth from using grow tubes [1]. Rather, early-season vine growth usually results in a single dominant shoot that is straight with long internodes. In one study, newly-planted vines that were not pruned at planting and that were not grown in grow tubes had significantly more leaf area and end-of-season root mass than those trained to a single shoot, regardless of whether or not the vines were trained to a single shoot and established with or without grow tubes. Leaf area and root growth are cited as being most important in vineyard establishment. Additional research in Michigan and other states indicates an increase in shoot extension with the use of grow tubes, but not an overall increase in above- or below- ground vine growth, or an increase in long-term vine productivity [2]. Premature defoliation of vine parts inside the grow tubes was associated with reduced hardiness of vine tissue. 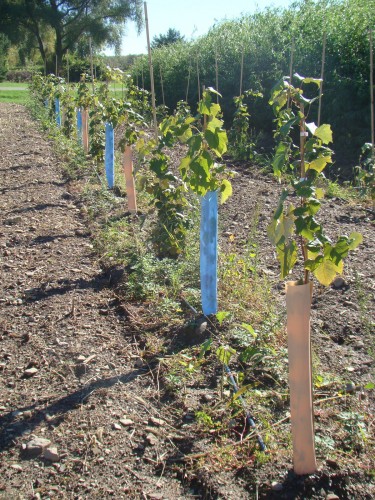 In 2012, the staff at Double A Vineyards conducted a simple experiment that compared the use of Blue-X grow tubes, Plantra grow tubes, and an untubed control for ‘Concord’ establishment. We measured end-of-season vine growth by counting the number of ripe nodes with developed periderm, and saw no difference. Periderm on untubed vines had typical “mahogany” color associated with ripened wood, while periderm on vines grown with grow tubes of either type had a more bleached appearance. While we will follow vine development this coming growing season, our previous experience with several varieties including natives, hybrids, and vinifera suggests there will be no detrimental effects associated with vines established with a grow tube as compared with those grown without one.

Despite the lack of research that supports the claims of an increase in the productivity of young vines, there are some generally recognized benefits of using grow tubes in vineyard establishment, including early development of a single, upright-growing trunk without labor inputs once the grow tubes are installed; protection from animal depredation; and, perhaps most important, protection from chemical herbicides that are often used during vineyard establishment. As noted, vines grown with the use of grow tubes generally produce one dominant, upright-growing cane that can be used to develop the first “semi-permanent” trunk. Protection from feeding by animals such as deer and rabbits can be critical in establishing first-year leaf area in situations where such protection is needed. Minimizing weed growth around young vines is critical during their establishment, as weeds can compete with vines for water, nutrients, and sunlight, with the potential to reduce growth and productivity of young vines.

Interestingly, in our experience, fungal disease pressure is usually not a problem when using grow tubes despite the greenhouse-like conditions inside them. Apparently, temperature fluctuations inside the tubes is not conducive to disease development. One problem that does occur on occasion is foliar feeding by insects such as Japanese Beetles. As the goal of vineyard establishment is to maximize leaf area development of young vines, leaf feeding by insects should be monitored regularly, and control measures should be applied as soon as feeding is observed. In any case, grow tubes should be removed towards the end of the first growing season to promote hardening off (we usually remove them in early September in western New York), and tubes can be stored and re-used for future establishment of new vines.