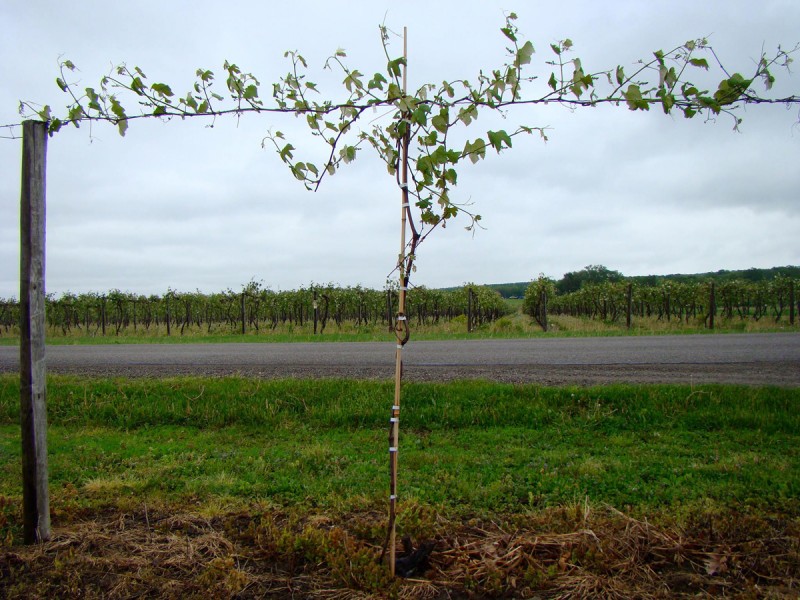 Choosing an appropriate training system for your vineyard is one of the most important decisions you will make; that decision will affect potential productivity and profitability for the life of the vineyard. The most appropriate training system for your vineyard is based primarily on growth habit and the need for optimum fruit exposure, and is affected by vine vigor and winter hardiness. Our Marketing Specialist, Danielle Huber, has published a new set of diagrams on our website depicting the establishment of Top Wire Cordon (TWC), Vertical Shoot Positioned (VSP), and Mid Wire Cordon (MWC).  This article will discuss the critical steps in vineyard establishment for these training systems.

Top Wire Cordon is used primarily for downward-growing (procumbent) cultivars such as many native Vitis Labruscana varieties. It can also be appropriate for some more upright-growing cultivars such as many French-American hybrid varieties, especially those with hardy trunks and fruit that does not need optimum fruit exposure in order to produce high quality fruit and wine. As compared with VSP training, TWC training is much more efficient as it requires much less hand labor and fewer cultural manipulations. TWC training employs a single fruiting wire at 5’ to (preferably) 6’ above ground level, on which a semi-permanent cordon is trained, and often a lower wire at about 30” above ground which is used for training purposes and to establish a straight trunk. If desired, a 7’ long bamboo stake, or equivalent, can be used as a substitute for the lower wire.

Vertical Shoot Positioned (VSP) training is used primarily for upright-growing cultivars, especially those that benefit from improved exposure to sunlight that can increase potential wine quality and minimize summer fruit rots. As compared with Top Wire Cordon training, VSP is much more labor-intensive due to the need for summer shoot positioning, leaf removal, and summer (top) hedging. VSP training employs a fruiting wire at 30-36”, and usually three sets of catch wires at 10-12” intervals above the fruiting wire.

Mid Wire Cordon (MWC) training is used where neither Top Wire Cordon (TWC) nor Vertical Shoot Positioned (VSP) training is appropriate for the cultivar being grown. Examples include cultivars with upright shoot growth that do not require maximum sunlight exposure of the fruiting zone (i.e., cultivars that have relatively disease-resistant fruit that does not necessarily benefit from increased exposure to sunlight), and also cultivars with weak trunk growth due to inherent lack of vigor or susceptibility to winter injury. MWC training may be appropriate where training to TWC is difficult due to the difficulty in establishing permanent trunks, and where economics do not justify the increased labor inputs associated with VSP training. MWC training employs a fruiting wire at 36-48”, with (generally) one set of catch wires at least 12” above the fruiting wire.

Establishment practices (other than trellis construction) are similar regardless of the training system employed. At planting, one or two buds are retained near the graft union on grafted vines, or near the crown of the vine on own-rooted vines. Support is usually provided with a bamboo stake or other support. For grafted vines, the graft union should be planted above the ground so the scion variety does not produce roots. Where winter graft union protection is needed in order to prevent winter injury, it is critical that the graft union be planted close to the ground (1-2” above final ground level) so that graft unions can be covered with soil or other insulating material during the winter months. Some viticulturists promote leaving more than a few shoots in the first growing season in order to maximize vine leaf area and root production, which may be a viable option, especially in warmer climates. The method of pruning to only a few shoots promotes the establishment of one or two strong canes that can be used to train the initial structure of the vine. If grow tubes are used during the establishment year, a single shoot will tend to predominate.

The primary goals in the second growing season are to begin to establish the semi-permanent structure of the vines, and to fill as much of the available trellis space as possible with functional leaf area in order to develop a strong root system that will be able to support a crop in future years. Regardless of training system, a single strong cane is retained from the previous year’s growth and secured to the fruiting wire, if possible. For TWC, if growth does not reach the top wire, it can be secured to the lower wire. For all training systems, a second trunk can be started by leaving a short spur at the base of the vine, just above the graft union on grafted vines, or just above ground level on own-rooted vines. Shoots often emerge from buds just above the graft union or from ground level or below on own-rooted vines, one of these may also be used to establish a second trunk. In Year Two, crop should be limited by cluster thinning or defruiting in order to encourage vegetative growth. In northern climates, second year vines are generally defruited. In southern climates or where first year vine growth was vigorous, it may be appropriate to leave a small crop, but not so much as to interfere with the development of a healthy vine that is capable of carrying a substantial crop in the third growing season.

The primary goals in the third growing season are to complete (or nearly so) the semi-permanent structure of the vines, and to produce sufficient leaf area in order to ripen at least a partial crop this year, and a full crop in Year 4. Third year vines should yield between one-half and a full crop, depending on the amount of trellis fill achieved. Vines that produce a full canopy of healthy leaves can be fully cropped (as appropriate for the variety and desired wine quality attributes), while weaker vines may require some fruit removal by cluster thinning so that vines are not over-cropped.

TWC:
A single cane can be pruned and trained in each direction from the head of the vine (left side of the diagram), and cordon establishment can be initiated by retaining spurs on second year wood (right side of the diagram) . Spurs should be spaced about 6” apart. For highly fruitful varieties such as most French-American hybrids, spurs can be pruned to two to three buds. For Vitis labruscana species such as ‘Concord’ where basal buds (nodes one to three on one year canes) tend to be less fruitful, vines can be short cane (long spur) pruned to five to eight buds. Shoots emerging below the top wire are removed unless they are needed for leaf area needed to develop the vine’s reserves – generally speaking, a minimum of three shoots per foot of row should be retained. As shoot growth progresses during the season, shoot positioning is generally not needed but vigorous shoots that grow over neighboring vines should be positioned downward so as not to interfere with sunlight exposure of the neighboring vine.

VSP:
A single cane can be pruned and trained in each direction from the head of the vine for cane-pruned systems (right side of diagram), or, spur-pruned cordons can be retained for spur-pruned systems (left side of diagram) . In either case, three to five buds are retained per foot of row (for example, 18 to 30 buds are retained on vines spaced six feet apart within the row). Where possible, shoots emerging from cane growth below the fruiting wire should be removed to avoid overcrowding and shading at the head of the vine, but on cane-pruned systems, one or two shoots should be retained below the fruiting wire as potential renewal canes for the subsequent year’s growth. During the growing season, shoots are manually “tucked” or shoot positioned between the sets of catch wires. Shoots that emerge through the top set of catch wires are summer pruned to encourage upright growth and minimize shading of the fruiting zone. Summer leaf pulling in the fruit zone is often performed to increase sunlight exposure of fruit to increase potential wine quality (especially for red varieties) and decrease the risk of summer fruit rots.

MWC:
Mid wire cordon training can be used where neither TWC nor VSP are appropriate, as described above. Cordons are established in similar manner as TWC. During the growing season, shoots are allowed to attach to the upper wire(s) or grow through the sets of catch wires, and additional shoot positioning can be attained by manually tucking shoots between the sets of catch wires. Shoots that emerge through the top set of catch wires are allowed to sprawl, generally without using any summer pruning. Again, this may be appropriate for some varieties, but it does not provide the fruit exposure needed for production of premium wine varieties, especially many vinifera.

Year Four (and Beyond).
Canes or cordons should be fully established and annual growth should fill the available trellis space. Depending on the variety, wine quality may be improved by reducing crop load, usually by removing second and/or third clusters on developing shoots. In regions where winter injury to trunks is anticipated, new trunks can be trained by retaining one or more suckers annually, and used to replace older, winter-injured trunks.