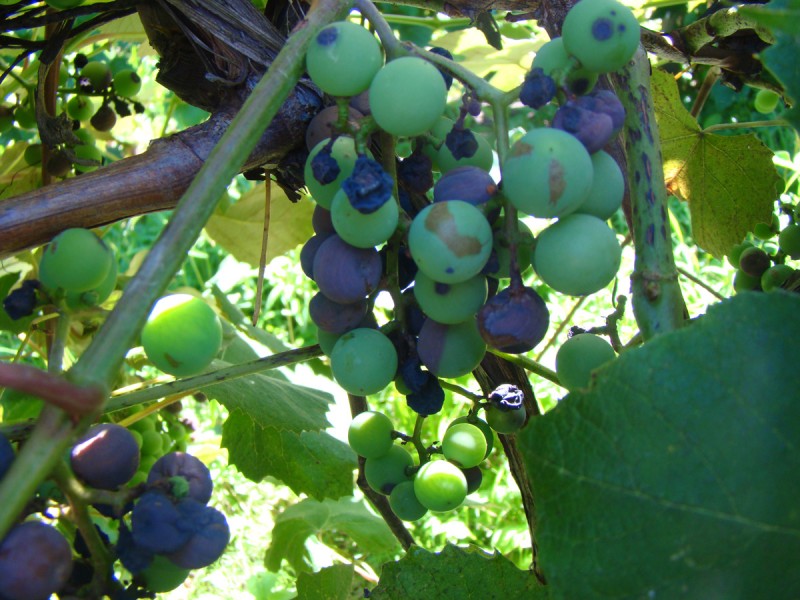 Higher than average precipitation across many parts of the Eastern and Midwestern states has brought disease management issues to the forefront. Over the past several weeks, our staff has been contacted by grape growers from many growing regions with disease problems in their vineyards, many which had not been seen in prior years, or at least not to the extent that they have occurred this year. We have received questions from growers about five early-season diseases, all caused by fungal pathogens: black rot, downy mildew, powdery mildew, anthracnose, and phomopsis. Inoculum for these pathogens are present in most vineyards. The combination of disease potential with high precipitation and high humidity, especially during events that lasted for an extended period of time, have resulted in high disease pressure in many vineyards this year.

Black rot is a fungal pathogen that thrives in warm, humid climates, and is prevalent across the eastern and mid-western United States. Native American and hybrid cultivars vary widely in their susceptibility to black rot, whereas all common vinifera varieties are highly susceptible.

Initial black rot infections can occur from inoculum in the vineyard, or can be blown in from a distance. Infections typically spread from mummified berries from the previous year’s infections to leaves, and then to fruit, and under severe conditions can result in complete crop loss. All young green vine tissues are susceptible to infection; leaf and fruit infections are the most common. Small (0.25” or less) brown circular lesions develop on infected leaves, and within a few days, tiny (but clearly visible) black fruiting bodies called pycnidia form within the lesions. Fruit infections first appear as small light brown circular areas that spread to the entire berry within days. The berries turn darker brown with masses of black pycnidia on the surface, and then shrivel into hard black raisin-like “mummies”. These mummies, as well as cane lesions, serve as the major source of inoculum in future years, so it is important to remove them from the vineyard during winter pruning.

Downy mildew is another fungal pathogen prevalent in warm, humid regions. Vinifera cultivars are most susceptible to infection by downy mildew, with wide variation of susceptibility among native American and hybrid varieties.

Downy mildew inoculum overwinters in leaf debris on the vineyard floor. Spores are spread by rain splash to young leaves, flower clusters, and fruit. Sporulation occurs on plant tissue containing stomata, which typically results in lesions with a white “downy” appearance on the undersides of leaves or other infected tissue. In some cultivars such as ‘Concord’, leaf infections are less common, but infected berries become reddish colored, sometimes without much visible sporulation. Under the “right” conditions, downy mildew infections can “explode” and defoliate grapevines prematurely, making them more susceptible to winter injury. Vineyards with poor air circulation that extend wetting periods are most susceptible to outbreaks of downy mildew.

Powdery mildew has been described as “perhaps the most important fungal disease of grapevines worldwide” (Dr. Wayne Wilcox, Cornell University). There is wide variation in varietal susceptibility to powdery mildew infection. Generally, vinifera cultivars are most susceptible and native American cultivars least susceptible, but control measures are often needed even on only moderately susceptible varieties.

In the Eastern United States, powdery mildew overwinters as cleistothecia within cracks in the bark of grapevines. Under certain conditions (temperatures over 50 degrees F and 0.1” rainfall), the cleistothecia discharge spores into the air. When these spores land on leaves or clusters, they germinate and form a small, inconspicuous fungal colony on the surface of infected tissue. After these primary infections have developed, additional secondary infections from spores (called conidia) are wind-blown and do not require rainfall for dispersal or infection. Hence, early-season sprays are critical on susceptible varieties in order to avoid an epidemic. Once primary infections have developed, “every day is a powdery mildew infection day”, and spread of the disease is enhanced with high relative humidity. Uncontrolled powdery mildew can destroy infected clusters and cause “diffuse” cluster infections that increase their susceptibility to bunch rots. Leaf infections can limit photosynthesis and reduce fruit quality, vine growth, and winter hardiness.

Anthracnose is not a common disease in grapes in all grape regions, but where it occurs, it can be very damaging. Anthracnose is more common in the warmer and more humid regions of the United States, and is most prevalent in years with multiple rain events early to mid-season. Cornell University guidelines list Vidal, Marquette, Frontenac, La Crescent, Reliance, and a few other seedless cultivars as being particularly susceptible to the disease. Some cold-hardy cultivars such as Edelweiss, Esprit, Brianna, St. Pepin, and Swenson White are somewhat susceptible. Anthracnose has been reported on Concord, Catawba, and Leon Millot in the Midwest, but such occurrences are rare in Northeastern states.

Dr. Mike Ellis at Ohio State University has written a fact sheet on anthracnose that can be found at: https://ohioline.osu.edu/factsheet/plpath-fru-15 .

Anthracnose overwinters on infected canes and berries, and spores are spread by raindrops to young, susceptible tissue. Additional spores are produced from these infections and are spread by rain. All succulent parts of the vine are susceptible; lesions on leaves, shoots, and berries are most common. Leaf infections appear as numerous small, circular brown spots that turn gray in the center with brown or black margins. Leaf symptoms are easily distinguishable from black rot lesions which are circular brown spots with minute black picnidia inside the lesions. Shoot infections result in dark, sunken lesions, typically at the base of the shoot. Berry infections result in small (ca. 0.25” diameter) spots, with whitish-gray centers surrounded by reddish brown to black margins (referred to as “bird’s eye” symptoms). Thus, berry infections caused by anthracnose are also distinguishable from those caused by black rot, although severe berry infections can shrivel and dry into mummies that appear similar to those caused by black rot. Removal of infected canes from the vineyard is an important aspect of controlling the spread of anthracnose in vineyards.

Phomopsis is a fungal pathogen that, like anthracnose, can infect all succulent tissue on grapevines (if conditions are favorable) and is common in most viticulture regions of the world.

Phompsis overwinters in infected canes and rachises. Rainy weather during the growing season is necessary for movement of spores from overwintering infections to susceptible tissue. Leaf infections result in small, light green spots. Infections that occur on the developing rachis when clusters first become visible at about 3” shoot growth are most damaging and can result in severe fruit loss because whole clusters or cluster segments can abscise from the vines. Infections at the base of green shoots produce elongated lesions that weaken them and make them more susceptible to breakage. Rachis infections result in sunken black lesions that may girdle the rachis and cause berries below the infection to shrivel. Berries can become infected shortly after bloom, but the disease may remain latent until fruit ripening. Infected berries develop brownish coloration, and black fruiting bodies may appear on the skin of the fruit. Infected wood left in the trellis can serve as a source of infection for many years. Hence, cordon trained vines, especially those that are hedge-pruned, are more susceptible to disease buildup than are cane-pruned vines.

Disease identification is the first step in developing effective management programs for their control. Many states with established grape industries publish annual pest management guidelines and can be found online or at your local Cooperative Extension office. A non-exhaustive list includes:

An excellent summary article of disease management spray programs for grapes, by Dr. Wayne Wilcox, Cornell University, can be found at:
https://doubleavineyards.com/kb/?s=wilcox&ht-kb-search=1