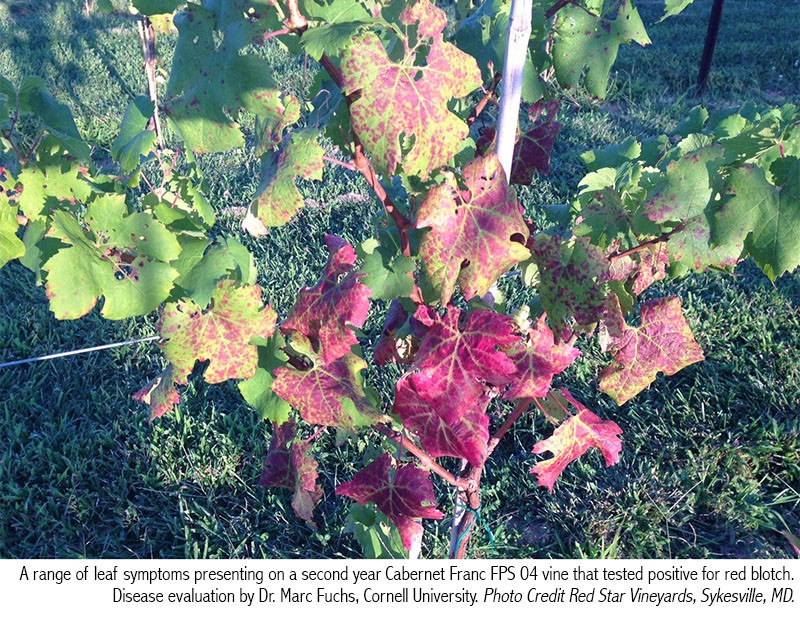 Grapevine red blotch-associated virus (GRBaV) is a recently identified virus which represents the latest addition to the long list of graft-transmissible agents that have been discovered in grapevines. This article will summarize what is currently known and not known about red blotch, and the future for the production of virus-free “cleaner” grapevines.

In the early 1990s, vines with red leaf symptoms were observed in California and elsewhere on many selections, but they tested negative for leafroll viruses. Researchers were stumped in their efforts to determine a cause, and terms like “red leaf”, “leafroll-like”, and “false leafroll” were used to describe the disease, now known as red blotch.

In about 2007, growers in California began noticing an increase in vines with red leaf symptoms similar to symptoms of leafroll viruses, on vines planted from both certified and non-certified budwood. Over the next few years, samples from many of these vines were evaluated for viruses. Many tested negative for leafroll viruses, and attempts to find a new or variant leafroll virus (one not detected with current methodology) failed. In 2008, observations made in commercial and experimental vineyards in California and New York indicated the presence of some vines with red leaves and low sugar levels or delayed harvest. The red leaf symptoms typically began prior to veraison at the basal end of shoots, and appeared similar, but not identical, to those associated with leafroll viruses. Typically, there was no cupping or rolling of leaves as is associated with leafroll viruses, and leaf veins sometimes turned red, as opposed to the leafroll symptom of leaves turning red but retaining green veins.

In the fall of 2010, dormant canes were collected from symptomatic vines of several red vinifera cultivars. In 2011, researchers at Cornell University isolated a new virus from these canes, and researchers at the University of California discovered the identical virus. In October 2012, these researchers reported their discovery and agreed to name this new virus grapevine red blotch-associated virus (GRBaV). Detection efforts for GRBaV were initiated after that meeting, and commercial diagnostic labs now (since October 2012) have the ability to test for the disease.

EFFECTS OF RED BLOTCH ON GRAPEVINES

Red blotch is now known to occur in several red and white vinifera cultivars. Leaf reddening, starting at the basal end of shoots, is the primary symptom of red blotch on red cultivars. As previously mentioned, leaf symptoms are similar to leafroll virus symptoms. With both leafroll and red blotch, leaves turn red in late summer or early fall, primarily at the base of shoots. With leafroll, red leaves retain green veins, and leaf margins roll downward. With red blotch, leaf veins often turn red or pink, and rolling of leaf margins is absent. A side by side comparison of typical symptoms of red blotch and leafroll viruses can be found at: http://ucanr.edu/sites/NCPNGrapes/files/161782.pdf . Symptoms of red blotch can be variable, and likely depend on environmental factors, cultivar, and perhaps rootstock. In some Eastern US vineyards, typical symptoms are red blotches on leaves, but veins may remain green, or the veins may turn yellow or red (Photo 1). Leaves sometimes turn crimson red by the end of the season, and fully symptomatic leaves may dry up and prematurely drop from the vines. Red blotch has been found in some white vinifera cultivars, but symptoms are less noticeable and have been described as a slight chlorosis (yellowing) of the leaves. For the most part, vine growth and yield does not appear to be greatly impacted by the virus, but in some cases, newly planted vines that are infected with red blotch have stunted shoot growth.

WHAT WE CURRENTLY KNOW ABOUT RED BLOTCH

Red blotch is a graft-transmissible virus.

To date, vines infected with GRBaV have been identified in 20 cultivars in 8 states.

Symptomatic vines that have the virus are often associated with reduced brix or delayed harvest, and are sometimes associated with higher acidity at harvest. However, problems ripening fruit have not been an issue in all vineyards in which vines have tested positive for red blotch, and the severity of symptoms is not the same every year.

A PCR assay has been available for diagnosis through commercial laboratories since October 2012. Many increase blocks have been evaluated since that time and are no longer being used as a source of budwood; however, that means that until very recently, nurseries using propagation material that met current California virus certification standards have likely been producing and selling grapevines that contain the red blotch virus.

Virus elimination therapy techniques currently being used at Foundation Plant Services appear to be effective in eliminating the virus. At last report, three selections out of 1620 in the Classic Foundation Vineyard (the source of budwood for many established certified increase blocks) tested positive for GRBaV (there are about 5000 selections total in this vineyard). Additionally, all 1100 selections evaluated from the Russell Ranch vineyard have tested negative for the disease. The Russell Ranch planting is being developed through the National Clean Plant Network as the next source of certified budwood, and uses techniques such as micro shoot tip cultivation that have been effective in eliminating other known graft transmissible viruses in grapevines, with the exception of rupestris stem pitting-associated virus.

Late summer and early fall is recognized as the preferred time to sample for leafroll viruses, typically by sampling mature leaves. Recent research indicates that any grapevine tissue collected at any time is suitable for the detection of red blotch, including collection of mature leaves in late summer and early fall when red leaf symptoms develop, and also dormant canes collected in winter.

There are indications of an increased incidence over time of red blotch in some vineyards.

WHAT WE NEED TO LEARN ABOUT RED BLOTCH

While researchers have found that red blotch can be detected by sampling any grapevine tissue at any time, further research needs to be performed to determine the optimal time and tissue for sampling.

While the presence of GRBaV has been associated with lower brix or delayed harvest and other potential wine quality issues, this is not always the case. Many wineries in California are producing separate lots of wine from the 2013 harvest from red blotch positive and negative sources, so we should begin to get a better handle on wine quality issues in the near future.

All vineyard blocks contaminated with red blotch do not respond in the same way. We need to understand differences due to site, management practices, cultivar selection, and variety/rootstock interactions.

WHERE DO WE GO FROM HERE?

Until just over a year ago (October 2012) there was no test available for red blotch. Since then, all of Double A Vineyard’s sources of vinifera budwood have been sampled and evaluated for the presence of GRBaV, and we have discontinued collecting propagation material (budwood and rootstock) from all blocks in which the virus has been found. Moving forward, we anticipate very low if any incidence of red blotch in our nursery stock. However, we cannot guarantee 100% freedom from red blotch in our vines at this time for the following reasons: not every vine has been sampled, false negatives are known to occur in testing for grapevine viruses, and additional red blotch infections may occur in vineyard blocks that previously tested free of GRBaV. The likelihood of the latter will be better understood once we identify the vector or vectors responsible for transmitting the disease.

Moving forward, Double A Vineyards is committed to developing new propagation blocks from plant material obtained through the National Clean Plant Network (NCPN). The NCPN was founded in 2008 and has developed updated and stricter “Protocol 2010” standards that confirm the absence of many plant pathogens, including viruses, according to our current knowledge. To qualify as Protocol 2010 plant material, the vines must have been generated using microshoot tip culture and be tested for an extensive list of pathogens. This process can take several years for each selection produced. When vines are produced that meet the Protocol 2010 standards, they are planted in the primary NCPN foundation collection at Russell Ranch near Davis, California.

The first vines to qualify for Protocol 2010 vines were rootstocks, and were planted in 2011. There are now over 1000 vines planted at Russell Ranch that are starting to produce plant material for grapevine nurseries. To date, we have only been able to obtain a very limited number of relatively few selections as softwood cuttings or mist propagated plants. This winter, we plan to obtain cuttings from several selections. These will be grafted to rootstock that also meets the Protocol 2010 standards, and in 2014 we will begin to establish vines in our new increase block for a cleaner source of planting material. Increase blocks planted from Russell Ranch material will need to conform to strict standards of sanitation and frequent re-testing to ensure the vines continue to meet the Protocol 2010 standards. Double A Vineyard’s increase block represents a substantial investment and a major commitment to improving the cleanliness of the plant material we offer. Although the waiting time for plant material that meets Protocol 2010 standards has been longer than hoped for, we believe the establishment of new increase blocks from this germplasm represents the best opportunity to offer the cleanest vines available to the grape industry in the near future.

As discussed in this article, viruses such as leafroll and red blotch are often associated with red leaf symptoms, especially in red cultivars. However, there are numerous other causes of red leaf symptoms in vineyards. In our experience, red leaf symptoms are often associated with environmental factors, nutritional deficiencies (particularly magnesium deficiency) and also trunk issues such as winter injury and crown gall. In 2013, some own-rooted Chambourcin vines planted in our propagation block near Fredonia, New York, exhibited red leaf symptoms and were interspersed among vines that did not exhibit similar symptoms. Samples from symptomatic (red leaf symptoms) and non-symptomatic vines were evaluated by Dr. Marc Fuchs at Cornell University, and tested negative for many viruses, including leafroll viruses and red blotch (Photo 2). Growers should not assume that red leaf symptoms are associated with a virus. This is especially true if all or almost all vines in a block exhibit symptoms, or if they are all congregated in a section of vineyard that may have different soil nutrition or moisture conditions. In most cases, viruses are not present in every vine in a given block, so the presence of virus and associated symptoms is expected to occur in random, haphazard fashion in vineyard blocks planted from budwood obtained from a contaminated source.

Many private laboratories provide diagnostic services to detect grapevine viruses including red blotch. Contact your state Extension service, farm advisor, or Double A Vineyards for a list of laboratories if you suspect virus in your vineyards and want to test for it.

“Red Blotch: Challenges and Opportunities”, a seminar by Dr. Marc Fuchs, Cornell University, presented November 14, 2013, at the UC Davis Convention Center. This is an overview of the most current information about Red Blotch disease of grapevines and the virus that causes it.