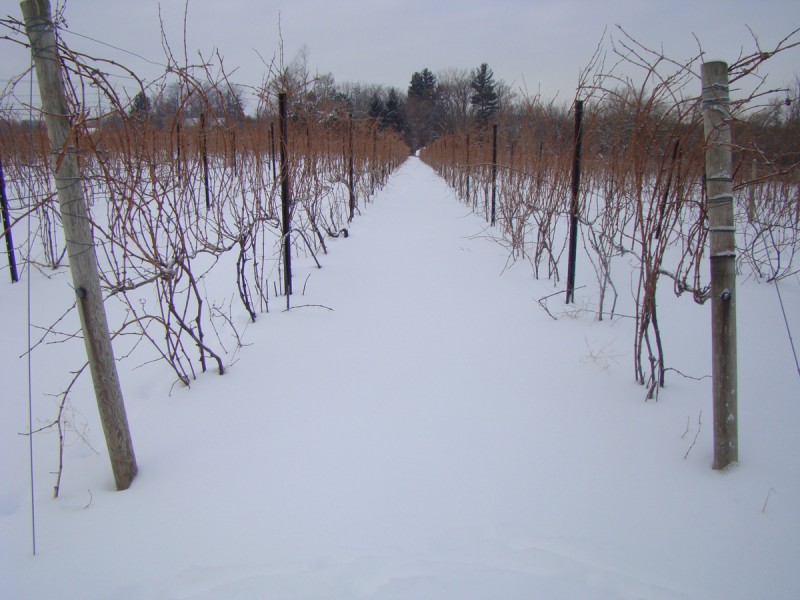 Once an appropriate variety and rootstock are chosen for a site, vineyard design becomes an important consideration that will affect the performance of the vineyard for its lifetime. Considerations include row orientation, vine spacing between rows and within the row, and trellis height.

The optimum orientation of vineyard rows is north to south in order to maximize sunlight exposure on both the east and west sides of the canopy. However, other row orientations can be productive and are capable of producing high quality fruit and wine. Practical considerations are often the deciding factor in determining the orientation of a new vineyard planting. If the field dimensions are of a long rectangle, then planting fewer, longer rows are more efficient than numerous shorter rows, especially for mechanical operations. Planting vineyard rows up and down a steep slope increases the risk of soil erosion, so planting along the contours is preferred.

The most productive vineyard is planted following the “one-to-one” rule, where the distance between rows equals the canopy height, as this is most efficient for capturing the available sunlight. Vineyards planted with wider row spacing are inherently less productive, as sunlight is “lost” to the vineyard floor; vineyards with narrower row spacing will likely result in reduced grape and wine quality due to shading of the canopy. Once again, practical considerations are often the deciding factor in determining the between-row spacing in a vineyard. Narrow vineyard equipment is available in many locations and can be used to plant rows that adhere to the “one-to-one” rule, or close to it. In any case, rows should be spaced at least 3’ farther apart than the width of the widest piece of equipment that will be used in the vineyard. A tractor with a 54” wheel-base requires rows about 8’ apart for comfortable equipment operation, and cross-slope plantings may require wider spacing to avoid drifting of tow-behind equipment into the lower row.

One of the more difficult concepts for many growers to grasp is that, up to a point, vineyard productivity and grape and wine quality can be maximized by planting the vines closer together within the rows. For the purpose of illustration, imagine two vineyards, one planted 8’ x 8’ with 680 vines planted per acre, and the other planted 8’ x 4’ with 1360 vines per acre. Let’s assume that the wider spacing will require 40 buds per vine to produce the desired crop of 4 tons per acre. In order to produce a similar crop size at the narrower spacing, only 20 buds per vine will be needed, rather than 40. Because the crop load per vine is half at the narrower spacing than the wider spacing – all other things being equal – the narrower-spaced vines will produce less, but riper, fruit per vine.

Despite the potential advantage of closer vine spacing, there is a point where the inherent growth potential of the vines can overcome the advantages. This is dependent on variety, rootstock, and soil fertility. In Sunlight Into Wine, Richard Smart has described three concepts that can be used to determine the optimum vine spacing to optimize yield and quality. The first is that optimum vine spacing is determined by the potential of the soil. Soils with higher fertility and water holding capacity and greater rooting depth have a higher capacity for vine growth. Low potential soils need closer vine spacing to achieve optimum yield and quality than do high potential soils. High potential soils, such as many deep, fertile soils in the Midwest that have been previously used for agronomic crop production, are capable of producing very large vines, and will benefit from wider vine spacing. As a case in point, own-rooted Traminette vines are usually productive when planted 6’ apart in the row, but this spacing has resulted in shade and over-vigor issues in some Midwest vineyards (based on a personal communication with Dr. Bruce Bordelon, Purdue University).

Finally, Smart’s third concept is that the vines should be spaced far enough apart to provide enough space for a sufficient number of buds to produce a balanced crop. In practical terms, this means that more vigorous varieties (or more vigorous variety/rootstock combinations) should be planted farther apart than less vigorous varieties (or less vigorous variety/rootstock combinations). As a case in point, Noiret (a complex hybrid variety developed by Cornell University) tends to produce excessive vine size and a low ratio of crop size to vine size, and may benefit from wider in-row vine spacing:

Overly vigorous vineyards tend to get into a vegetative growth cycle which favors shoot growth over fruit production. Excessive vegetative growth causes shading of the renewal zone, the area where fruit is produced and where buds are retained during pruning. In addition to reducing potential wine quality, shading also reduces the fruitfulness of the retained buds. Lower fruitfulness results in lower yields, and lower yields further promote shoot growth, resulting in a cycle of increased vegetative growth and decreased yields. Once a vineyard is planted, there are limited options to break this cycle and to get the vines back into balance. One option is the use of fairly elaborate trellis designs that utilize divided canopies. Other options include practices that devigorate the vines through irrigation management or by increasing weed or cover crop competition. In most of the Eastern United States, irrigation management is of limited practicality, since summer rainfall is unpredictable. Grass cover crops can be useful in slowing down vine growth, but permanent sods can become too competitive with the vines during dry periods, and the risk of spring frost is greater with permanent sods as compared with bare ground. High density plantings provide another method to restrict shoot growth by increasing competition between the vines for water and nutrients. This is a particularly useful concept on low potential soils with low to moderate water holding capacity and fertility, but much less useful on high fertility soils with high water holding capacity. In the latter case, vigorous shoot and vine growth at close vine spacing can lead to disastrous consequences by favoring the overly vegetative cycle described above.

The majority of commercial vineyards being planted today are considered “high density” plantings. In-the-row vine spacing is typically 4-6’ for vinifera and 6-8’ for hybrid and native cultivars. These spacings should be considered a guideline as they assume a balance between vine density, soil potential, and the inherent vigor of the cultivar and rootstock. Vines grafted to a devigorating rootstock such as Riparia Gloire should be planted closer together than vines planted to a more vigorous rootstock such as C3309 (the rootstock 101-14 is of intermediate vigor in most locations). Likewise, cultivars that are inherently more vigorous (such as Cabernet Sauvignon) should be considered for wider in-row spacing than less vigorous varieties (such as Pinot Gris and Pinot Noir).

As previously discussed, the optimum canopy height is equal to the distance between rows. I have intentionally used the term “canopy height” rather than “trellis height”, as the grapevine canopy can exceed the height of the trellis, as illustrated in the photograph included in this article. Once again, practical concerns often outweigh the ideal. Top Wire Cordon (TWC) traininghttp://www.doubleavineyards.com/Images/TopWireCordon.pdf usually uses a trellis height of about 5 ½ to 6’, as pruning and other manual operations would be uncomfortable if the trellis was higher. Vertical Shoot Positioned (VSP) training http://www.doubleavineyards.com/Images/VSP.pdf usually uses a fruiting wire at 30-36”, with (generally) 3 sets of catch wires located above the fruiting wire. The top set of catch wires should be placed as high as possible in order to maximize the effective canopy height (within the confines of the “one-to-one” rule) in order to produce sufficient leaf area to produce high quality fruit and wine. In the case of VSP training, the canopy height is usually limited to the height at which summer pruning can be achieved in a practical manner.

Considering human limitations, the ideal vineyard (arguably) is planted with north to south orientation, with rows planted 6-7 feet apart, and with a trellis construction that provides an effective canopy height equal to the row spacing. Practical considerations often outweigh the ideal so many vineyards are planted with other row orientations and with rows planted farther apart and/or trellises being shorter than ideal. Within these confines, growers should understand the relative potential of the vineyard soil and the inherent vigor of the variety and rootstock being planted, and plant vines at the appropriate spacing in order to achieve a full canopy of healthy leaves with little shade and full crop potential of the highest quality fruit. There is no cookbook to achieve this, but it is part of what makes the art and science of viticulture so interesting.

Information about relative vine vigor, suggested planting distance between vines, and suggested training systems can be found in our Grapevine Variety Characteristic Chart at: