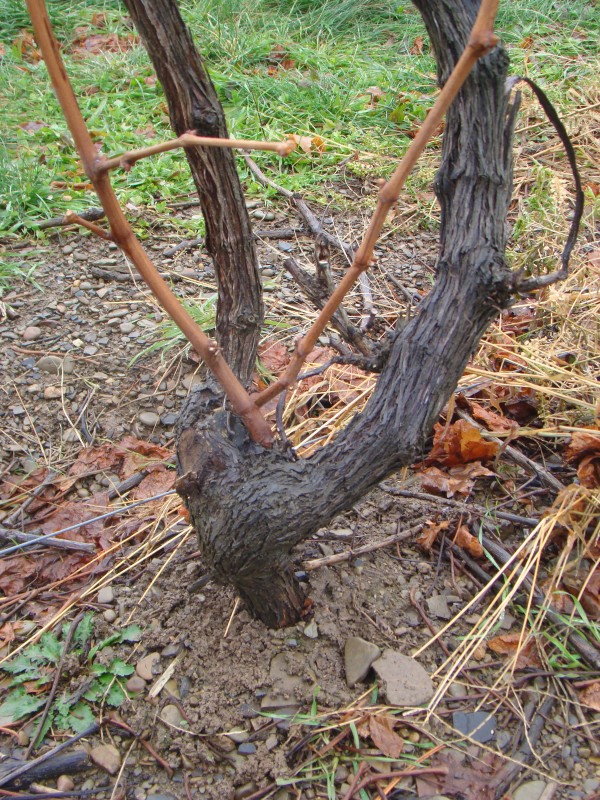 Selecting the proper rootstock for your vineyard is just as important as variety selection. Rootstocks are used to induce or reduce scion vigor or to overcome specific soil limitations caused by physical factors such as soil pH and high salt content, or biological factors such as phylloxera, nematodes, and cotton root rot. While some cultivars are commonly grown successfully on their own roots, others require the use of a specific rootstock for optimal vineyard production.

Traditionally, grapevines were grown on their own roots and, where practical, this is still a common practice. Native American varieties such as ‘Concord’ are tolerant (but not completely resistant) to root feeding by phylloxera, and with few exceptions, the ‘Concord’ industry in the Great Lakes region is comprised of thousands of acres of own-rooted vines. The main advantage of growing own-rooted vines is that vines can be renewed from new growth from buds that push at or below ground level if the trunk system is injured or killed by winter or mechanical damage. They are also easier to produce in the nursery, so initial vineyard establishment costs are lower for own-rooted vines than for grafted vines.

Until the mid-1800s, European vinifera vineyards consisted of own-rooted vines. The inadvertent introduction of phylloxera with the importation of American grape varieties changed that, and the European wine industry was nearly destroyed over the next few decades. Phylloxera is native to the eastern and southern United States. American grape varieties that evolved in the presence of phylloxera are tolerant to their feeding, meaning the vines can survive and be productive in the presence of phylloxera. Vinifera grapevines are native to Eurasia where the species evolved in the absence of phylloxera. Vinifera is susceptible (has no tolerance) to feeding by phylloxera. Once phylloxera was introduced to Europe, entire vineyards declined and died, the pest spread across the continent, and the European wine industry was decimated. T.V. Munson, a horticulturist and grape breeder from Texas, is widely credited with saving the Old World wine industry through the introduction of native Texas varieties that were tolerant to phylloxera for use as rootstocks.

While many native cultivars can be grown successfully on their own roots, vinifera and many hybrid varieties need to be grafted. According to Virginia Tech viticulturist Tony Wolfe, author of Wine Grape Production Guide for Eastern North America, “All vinifera grapes and hybrid grapes with 50% or more vinifera in their parentage should be grafted to a rootstock that provides resistance to phylloxera and nematode-transmitted viruses, such as tomato ringspot virus”. Grafted vines are produced by joining the scion variety to the variety that will provide the roots. Commonly used rootstocks – and those offered by Double A Vineyards – include 3309, 101-14, Riparia, 1103P.

3309 Couderc, commonly known as 3309 or C-3309, is a hybrid of Vitis ripariaand V. rupestris, and has been the most commonly used rootstock in the Eastern US for several decades. The preeminent Cornell viticulturist, Dr. Nelson Shaulis, demonstrated that native American (Vitis Labruscana) varieties, as well as several French-American hybrids, were more productive when planted in grape replant sites when grafted to 3309 rootstock as compared to own-rooted vines. He also demonstrated that Concord grafted to 3309 was just as productive in vineyards with sod row middles and no supplemental nitrogen applications as were own-rooted Concord managed with between-row cultivation and the application of 100 lbs. actual nitrogen fertilizer annually. (http://dspace.library.cornell.edu/bitstream/1813/4946/1/FLS-045.pdf ). 3309 rootstock is cold hardy, has high tolerance to phylloxera, and produces vigorous vines on moderately acidic soils. 3309 may be susceptible to feeding by both dagger and root knot nematodes.

Like 3309, 101-14 Millaret Et De Grasset, commonly known as 101-14 or 101-14 Mgt, is also a cross between V. Riparia and V. Rupestris. On most sites, 101-14 produces a moderately vigorous vine, somewhat less vigorous than 3309. 101-14 has high tolerance to phylloxera, moderate resistance to dagger and root knot nematodes, and is a popular rootstock for clay and near neutral pH soils. The use of 101-14 rootstock has become more prevalent in recent years, particularly in Eastern US vinifera vineyards where some vigor control is desired.

Riparia gloire, commonly referred to simply as Riparia, is a selection of Vitis riparia, a wild grape species native to the northeastern and midwestern United States. Of the rootstocks discussed in this article, vines grafted to Riparia produce the least vigorous growth. Riparia is most useful when vigor control is desired in order to produce high quality fruit on vigorous scion varieties. Because it is shallow-rooted, Riparia is less tolerant of drought, but more tolerant of waterlogged soil, than other rootstocks. It is highly resistant to phylloxera, and most sources indicate moderate resistance to feeding by root knot nematodes.

Although all of the rootstocks listed above have high phylloxera resistance and are adapted to moderately acidic to near neutral pH soils, none of them are well adapted to alkaline soils (pH above 7) or soils with high salinity, such as many soils in the southwestern United States. Vitis berlandieri, a species native to central and southwestern Texas, southeastern New Mexico, and northern Mexico, evolved in alkaline soils with high salt content. Rootstocks with V. berlandieri in their heritage are much better adapted to these conditions than are the Eastern US – derived rootstocks.

There are several commercially available rootstocks with V. berlandieri in their background, including 1103 Paulsen, commonly known as 1103P. 1103P is a highly vigorous rootstock widely adapted to many soil conditions. Unlike 3309, 101-14, and Riparia, it is well adapted to alkaline soils and those with high salt content. 1103P is highly recommended for use in areas in the southwestern US with alkaline and high salinity soils. It is a versatile rootstock used in viticulture regions around the world and is sometimes used in the eastern and Midwestern US where high vine vigor is desired or to influence mineral nutrient uptake (Effect of Rootstock on Norton Nutrient Status– Jackie L. Harris- Viticulture Research Specialist). 1103 is highly resistant to phylloxera and somewhat resistant to root knot nematodes, but has low resistance to dagger nematodes. 1103P is moderately to highly resistant to cotton root rot, a devastating soil-borne disease endemic to much of the range of Vitis berlandieri, and is considered highly resistant to Pierce’s disease, thus making it a popular rootstock choice for coastal regions and the southwestern US.

420A is a Vitis riparia x V. berlandieri (the native SW US species adapted to alkaline soils and poor at taking up potassium).  For dry climates where high vine vigor is desired,1103P (berlandieri x rupestris) is often used.  420A is less commonly used and of more recent interest in areas with high rainfall (so less vigor desired) and heat, as the lower vine K uptake tends to produce lower wine must pH.  (There’s a whole side story about wine pH.  If initial pH is below 3.46 then pH tends to lower during fermentation, making it less susceptible to microbial spoilage.  If initial pH is >3.46, then wine pH tends to increase and it is more susceptible to spoilage.  Among other things.)  So 420A might be a good choice where lower vine vigor is desired AND where lower K uptake and potentially wine must pH is desired.  There’s lots of interest in VA for CF, for example, where pH can go over 4 in hot years.  In WNY and cooler regions we have the opposite problem as cooler temps produce higher acidity/lower pH (the 2 are related) fruit/wines, so 420A is likely of little value here.

When growing grafted grapevines in regions that receive sub-zero (Fahrenheit) temperatures, graft unions need to be covered over winter using an insulating material such as soil or mulch. This practice is discussed here-http://www.doubleavineyards.com/news.aspx?showarticle=12.

Rootstock Offerings at Double A Vineyards

Double A Vineyards offers well over one hundred grape varieties. Many of them can be successfully grown on their own roots, and we offer them only as own-rooted vines unless custom grafting is desired. We offer many hybrid varieties as own-rooted or grafted vines, and we offer many clones and varieties of vinifera grapevines only as grafted vines. While we try to anticipate grower needs by speculating and producing numerous combinations of variety, clone, and rootstock, it is impossible for us to produce every combination on speculation. We do offer custom grafting for any desired cultivar/rootstock combination, including rootstocks not discussed in this article, as long as we can source the needed plant material. If your plans include a scion/rootstock combination not listed in our catalog or on our website, please provide a minimum 18 months lead time when you order so we can provide plant material that meets your precise specifications.