What are Growing Degree Days, and What Do They Measure? 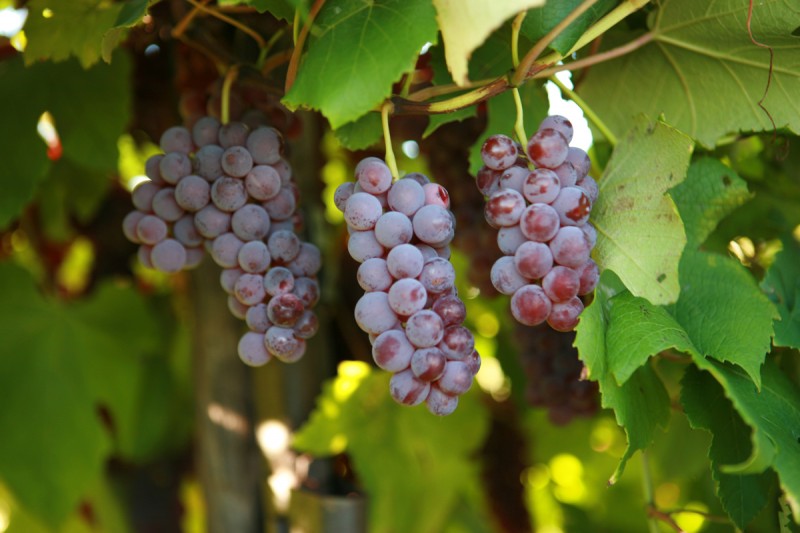 There are many factors that influence whether or not a specific grape selection will survive and be capable of producing high quality fruit at a certain location, including winter hardiness, length of growing season, and risk of spring frost. A common measure of the growing season is Growing Degree Days (GDD). Grapevine development during the growing season is strongly influenced by air temperature, with little plant development occurring below 50°F. GDD estimates the heat accumulation of the growing season. GDD are calculated by subtracting 50 from the average daily temperature; if that value is less than 0, then the GDD accumulation for that day is zero (there are no negative GDD values). The average daily temperature can be calculated as the daily high temperature plus the daily low temperature divided by 2, so

Cumulative seasonal GDD is a running total of GDD from April 1 to October 31. GDD accumulation is useful in comparing heat accumulation in one region to another or one season to another, and to predict the likelihood of ripening a crop of high quality fruit on a regular basis. GDD can also be used to predict stages of grapevine development (bud break, bloom, veraison, and harvest date), and are used in pest management programs to predict the emergence of certain insects, such as Grape Berry Moth.

A Growing Degree /Days Calculator supported by Syngenta can be found at: http://www.greencastonline.com/growing-degree-days/home. Your vineyard location can be identified by city or zip code. The default base temperature should be set to 50°F, “start” and “end” dates set to April 1 and October 31. The Calculator will indicate current seasonal GDD accumulation, GDD for any year, and, most valuably, for a 30-year average that can be used to help select appropriate cultivars to match climatic conditions.

Our Grapevine Variety Characteristic Chart lists varieties by harvest date “early”, “mid”, or “late” season based on our experience primarily in Fredonia, NY, which receives an average seasonal 2,663.5 GDD, (as indicated by the Syngenta GDD calculator). In a typical season in Fredonia, “early” harvest varieties ripen in late August to mid-September, and “mid” harvest varieties ripen in late September to mid-October. Actual harvest date might be a week or two earlier in a much warmer than average season, or a week or two later in a cooler than average season. “Late” harvest varieties typically ripen in mid to late October, although certain cultivars such as Chambourcin ripen in warmer years, and others such as Norton rarely, if ever, ripen at our location.

Just as you wouldn’t want to plant a cultivar that rarely ripens fully at your location, you may not necessarily want to grow a variety that ripens too early in the season. This is particularly true of high quality wine grape production. Grape quality is usually enhanced under cooler ripening conditions and in climates with warm, sunny days and cool nights. Grapes that ripen in hot climates or in the heat of summer often produce wine inferior to those produced in cooler climates, and dealing with fruit harvested at high temperatures can be problematic unless quick cooling of the fruit or must can be provided.

Growing Degree Day accumulation is only one measure of the characteristics of a growing season that determines whether or not a specific cultivar can be grown at a specific location. For a more complete discussion of matching vineyard site characteristics with cultivar selection, click here.

2 responses to “What are Growing Degree Days, and What Do They Measure?”