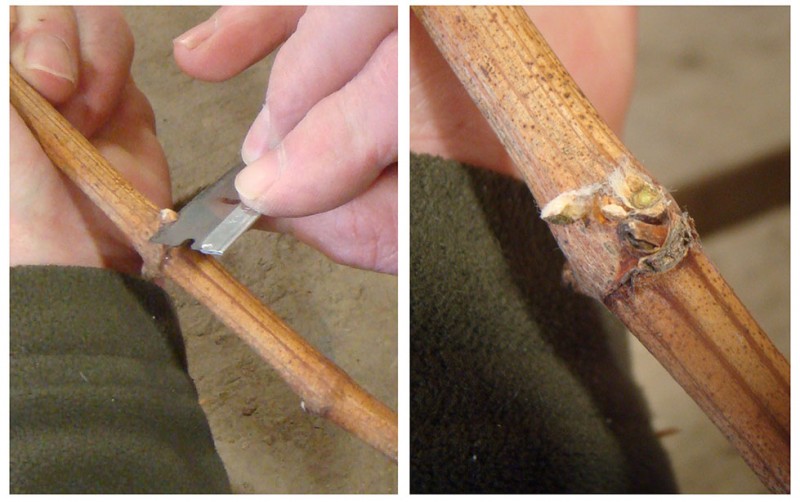 The “polar vortex” of cold Arctic air that affected a large portion of the continental United States during early January 2014 was responsible for widespread transportation delays and a shutdown of activities at many schools and businesses. Blizzard conditions persisted for several days near Buffalo, New York, for the first time since 1993. Air temperatures around -10°F were common in western New York and some Finger Lakes locations. Temperatures were even colder to the west, with temperatures in the minus-20s (°F) in some locations in the central Midwest, and the minus-30s (°F) in the upper Midwest. We have heard reports from our customers of sub-zero temperatures as far south as Tennessee, and frozen water pipes in Alabama. Grape growers across the region are (or should be) concerned about cold damage to their grapevines. If you are one of them, our advice is to STOP PRUNING, assess the cold damage to your vines, and make adjustments to your vineyard practices as necessary.

Researchers at land grant institutions in many states have conducted exhaustive studies on the cold hardiness of grapevines, the weather conditions that cause winter injury, the anatomy of freeze injury to grapevine tissue, managing vines and vineyards to minimize winter injury, and how to deal with injury once it occurs. Some of this research is the basis for this article, but it is only the “tip of the iceberg” (pun intended) about what we know about grapevine winter hardiness. This article will focus on assessing cold damage to vines, and what to do once it has occurred.

During the past week or so, we have been assessing the amount of bud damage in several cultivars that we propagate in our nursery. This is an important task for us, because significant bud damage will result in reduced stand counts in our nursery the following year (hence, our strategy is to collect as much brush from our budwood blocks early in the winter before bud damage is likely to occur, or to propagate additional material if cold damage has already occurred). Assessing bud damage is also an important task in production vineyards because a reduction in live buds will likely result in reduced crop potential the following year unless adjustments are made in pruning. Thus far we have not assessed bud damage in all our varieties, but the amount of damage detected follows expected patterns. We have seen minimal bud injury (about 10% dead primary buds) in native varieties such as Concord and Niagara, and a range of injury (25-60% dead primary buds) in hybrid cultivars such as Seyval, Vidal, Chambourcin, Traminette, Vignoles and Cayuga White. Limited assessment of vinifera indicates substantial bud injury, approaching 100% dead primary buds in some varieties and locations. There is a lot of information available about bud damage from Extension programs in many states, but assessing the damage in your own vineyards is the best way to determine how to proceed in terms of your own vineyard management strategy. Winter injury is affected by many factors including temperature, the duration of cold temperatures, the inherent hardiness of specific cultivars, and the health of the vines going into dormancy.

Assessing bud damage is a fairly simple task. Collect about 50 to 100 buds from each vineyard block you would like to evaluate. These buds should be representative of the buds you would retain when pruning – in other words, if you typically prune to short canes that are 5-6 buds long, collect 10 or 20 representative canes. If temperatures have remained below freezing since the cold event that you are concerned about, place the canes in a warm location for a day or two so that freeze-damaged buds will thaw and begin to desiccate. Hold the cane with the basal end towards you, and cut through the top of the bud at its midpoint (see the photo included with this article). Use a single edge razor blade or utility knife with a sharp edge. You can start by cutting off the top of the bud, and then make a series of deeper cuts until you identify the location of the best cut to determine any bud injury. The cross-section of bud will either be green, meaning the bud is alive, or there will be a brown to black appearance indicating injury. Grape buds are compound buds with primary, secondary, and tertiary buds. If the primary bud is dead but the secondary bud is alive, the secondary bud has the potential to produce a partial crop. If only the tertiary bud is alive, that bud has no crop potential but can produce some leaf area to keep the vine in survival mode. Photos of different levels of bud damage can be found at:

Assuming vines have not yet been pruned, the pruning level can be adjusted once the severity of bud damage has been determined. If 90% of the buds are alive, little or no adjustment to your normal pruning practice is necessary. If only 50% of buds remain, then retain twice the number of buds when pruning as you would had little or no injury occurred. Once bud loss approaches 75%, the best strategy is to delay pruning until shoot growth starts in the spring, or double prune by retaining all viable wood within the vine’s space while dormant and removing additional unneeded wood in the spring. Keep in mind that increased labor inputs are going to be needed to perform these tasks.

Freeze injury to canes and trunks can also occur and is more difficult to evaluate than bud injury. Injury to the phloem and to the vascular cambium will cause discoloration underneath the bark; depending on its severity, the trunks and canes may or may not be able to recover. Trunk injury is often confirmed when vine growth resumes in the spring and sucker growth is more vigorous and healthy than growth originating from the top of the vine. Crown gall may form on surviving trunks, these can be removed in the subsequent dormant season. Buds may push in the spring but shoots can collapse later in the growing season if injury is severe, or trunks can split and produce no growth. In cases of severe trunk injury, vines may push new sucker growth that can be trained to develop new trunks, so that only one crop is lost. In the worst-case scenario where temperatures were low enough and graft unions were not protected with soil or snow cover, vines and entire vineyards can be lost. If trunk damage is suspected, follow the strategy as described above for vines with bud loss approaching 75% – delay pruning until buds push in the spring, or retain extra canes and trunks during initial pruning, removing only growth that would be pruned off regardless of injury, and remove any unneeded growth once buds push in the spring and an accurate assessment of injury can be made.

Additional information about identifying and managing cold injury to grapevines can be found in the resources listed below.