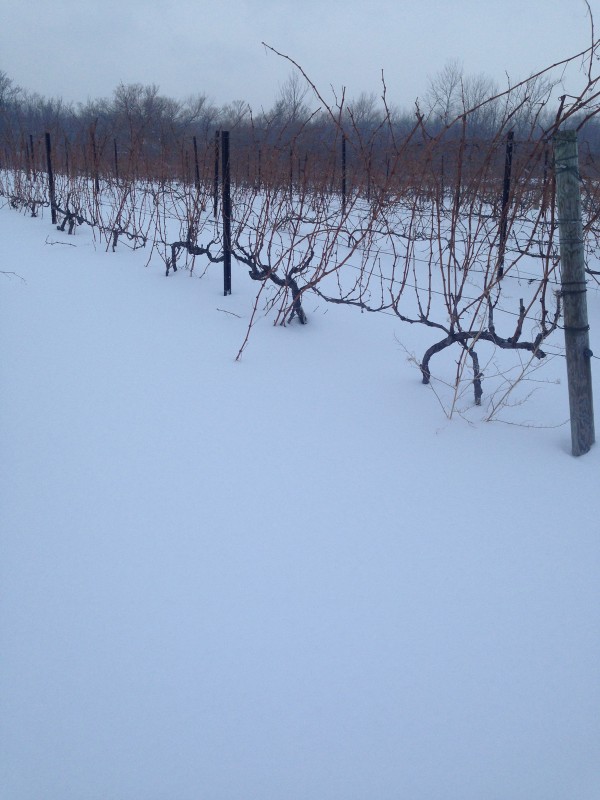 Winter injury caused by low winter temperatures is an important limiting factor to grape production in many regions the United States. Our Grapevine Characteristics Chart lists grape varieties by their winter hardiness according to USDA hardiness zone. Hardiness is determined by using a number of sources, including university publications, variety release bulletins, and our own and other grower’s experiences.

Most Vitis vinifera cultivars are hardy in Zones 6 or 7, meaning healthy vines can survive temperatures from zero to minus 10°F. Most American (Vitis labruscana) and hybrid varieties, including recent releases from the Cornell grape breeding program, are hardy to Zone 5 (hardy to -10°F to -20°F), and some of the newer “super hardy” cultivars developed in the Upper Midwest are hardy in Zones 3 or 4 (the hardiest of these varieties are hardy to about -40°F).

The U.S. Department of Agriculture maintains several websites related to the 2012 USDA Plant Hardiness Zone Map, which is based on average annual extreme winter temperatures from 1976 to 2005.http://planthardiness.ars.usda.gov/PHZMWeb/ allows you to locate your hardiness zone by entering your zip code.http://planthardiness.ars.usda.gov/PHZMWeb/InteractiveMap.aspx gives you access to an interactive map that shows the zones at higher resolution.

Since 1960, the USDA has released several versions of hardiness zone maps for the United States. These maps categorize locations suitable for winter survival of a rated plant in an average winter. Plant Maps maintains a website with the 1990 USDA Hardiness Zone Map that was based on data from 1974 to 1986. Interestingly, the 1990 map identified many areas as colder than did the original map issued in 1960, due to several severely cold winters in the eastern and central US during the data gathering period.

One of the drawbacks of using the USDA information is that the hardiness zones are based on average conditions, not extreme ones. Winter minimum temperatures can easily be 10°F colder in a severe winter than in an average one. For example, the 2012 USDA information considers Fredonia, NY, to be in hardiness zone 6b, meaning that the average winter minimum temperature from 1976 to 2005 was zero to -5°F. However, extreme winter minimum temperatures in Fredonia reach -15°F about once per decade. A relatively hardy vinifera cultivar such as Riesling (hardy to about -10°F) has the potential to produce a full crop of fruit in Fredonia most years, but substantial damage can occur in colder than normal winters, resulting in significant bud mortality (which will result in less than a full crop the following season) and trunk damage (which will result in the need to retrain the vines). In severely cold winters such as 1994, when temperatures dropped to -16°F with little snow cover and unprotected graft unions, Riesling vines did not survive in some plantings, and replanting of entire vineyards was necessary. Since the USDA maps refer to average conditions, and since the 1990 map is more conservative, I prefer using the 1990 information when making varietal recommendations to growers.

The USDA maps have additional limitations. Temperature variations from the average are more extreme in continental climates than in maritime regions (the extremes are more extreme). The maps do not take snow cover into consideration; snow is an excellent insulator that can protect the base of vines and roots from freeze damage. The maps also don’t take into consideration effects such as elevation. The microclimate at the bottom of a slope with little air drainage will likely be much colder on a still winter night than a site at mid-slope. Finally, the maps become less reliable west of the 100th meridian (central North and South Dakota through central Texas), since areas with low humidity have even more potential for temperature variations than those to the east.

There are many factors that influence whether or not a specific grape selection will survive and be capable of producing high quality fruit at a certain location, including winter hardiness, seasonal Growing Degree Day accumulation, length of growing season, and risk of spring frost. The USDA hardiness zone maps can be used to help determine an appropriate variety to plant in a given location keeping in mind the limitations discussed in this article.