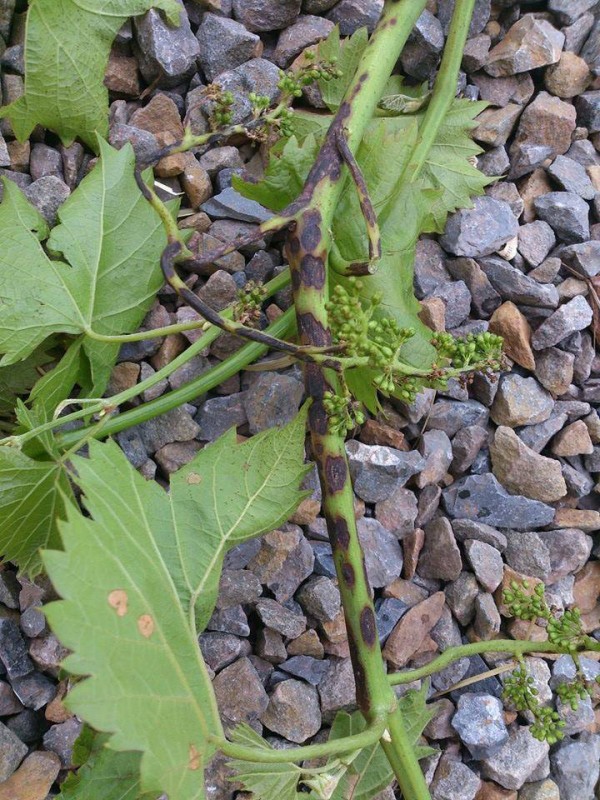 Chemical pest management options for growers with only a few vines are limited. While non-restricted use pesticides can be purchased and used by anyone (meaning, anyone who reads and understands the pesticide label prior to application and applies it legally), they usually come in package sizes intended for commercial growers with at least several acres of vineyard. This article is intended for the small/homeowner/backyard/hobbyist grower producing a small amount of grapes for their personal use (or to share with friends).

While chemical control options are usually necessary in humid regions, they should not be considered the first line of offense. Grapevine varieties differ substantially in their relative resistance to disease (Grapevine Characteristics Chart), so consideration should be given to planting the least disease-susceptible cultivar that has sufficient winter hardiness to thrive at your location. Typically, vinifera cultivars are much more susceptible to grape diseases such as powdery and downy mildew, black rot, phomopsis, and in some cases, botrytis and other fruit rots, than many American and hybrid varieties. Where possible, grapevines should be planted in areas with good air movement and full-day sun to aid in drying, which will reduce the chance of disease development. We often see crop failures in wet, fenced-in backyards surrounded by trees and buildings. Finally, inoculum for some diseases can be reduced by removing infected material, such as black rot mummies or anthracnose cane lesions, from the vineyard.

There are several grapevine diseases of concern to grape growers in humid climates with spring and summer rainfall, including black rot, powdery mildew, downy mildew, phomopsis, and anthracnose. If you need assistance in determining which disease(s) are an issue in your vineyard, refer to these University fact sheets:

It is important for the grower to understand that chemical controls for grapevine diseases are usually made on a preventative basis, meaning that control measures should be taken before infection has taken place. Once you see disease infection in the vineyard, sprays can be applied to prevent or minimize future infections, but existing infections will not be eradicated, and in most cases they provide inoculum to further spread the disease during the current growing season.

Double A Vineyards offers several homeowner chemical fungicides on our website that, if used on a preventative basis at timely intervals, provide control of all five listed grapevine diseases. These products include Spectracide Immumox and several Bonide products including Captan-50% WP, Fruit Tree Spray Concentrate (a pre-mix of Captan plus insecticide), Sulfur Plant Fungicide, All Seasons Spray Oil, and Copper Fungicide. While the following information is based on information provided on product labels and on many years of experience, Double A Vineyards will not be held liable for any reason should our customers decide to use these products. It is the responsibility of the applicator to read and understand the pesticide label prior to application, and apply it in legal fashion according to local, state, and federal regulations.

Application rates for all the products listed in this article are based on an amount of product per gallon of spray mix. Sprays should be applied just prior to the point of runoff on leaves and clusters.

Spectracide Immunox (1.25 fl. oz. per gallon) + Bonide Captan-50% WP(1.5 Tbsp. per gallon) is a basic homeowner spray mix that controls anthracnose, black rot, powdery mildew, downy mildew, and phomopsis. Spectracide Immunox contains the same active ingredient, myclobutanil, as the commercial product Rally. Unlike any of the other homeowner products, it is labeled for control of anthracnose and black rot, and it also controls powdery mildew. Spectracide Immunox should be applied starting at 1-3” shoot growth and can be reapplied every 14 days up to a maximum of 5 applications per season. Sprayed at 1.25 fl. oz. per gallon, one pint container of Spectracide Immunox makes 12.8 gallons of spray mix. Captan should be added for control of downy mildew and phomopsis. Captan provides some suppression of black rot, but should not be depended upon to control the disease under high pressure. Captan can be applied at 10-14 day intervals up to the day of harvest. Do not mix Captan with or closely follow an oil spray, and do not mix Captan with highly alkaline materials such as hydrated lime. Sprayed at 1.5 Tbsp. per gallon, one 8 oz. container of Bonide Captan makes approximately 18 gallons of spray mix.

For increased control of powdery mildew, Bonide Sulfur Plant Fungicide (1-3 Tbsp. per gal.) can be added to any spray on sulfur-tolerant varieties in a tank mix or can be alternated with Spectracide Immunox. This is a useful spray on varieties very susceptible to powdery mildew and tolerant of sulfur applications. Sulfur can be substituted for Spectracide Immunox for control of powdery mildew, but sulfur does not control black rot. CAUSES INJURY ON SULFUR-SENSITIVE VARIETIES – consult Double A Vineyards’ Grapevine Characteristics Chart for varietal sulfur sensitivity. Applied at 1-3 Tbsp. per gallon, one 4 lb. package of Bonide Sulfur will make at least 50 gallons of spray mix.

Bonide Copper Fungicide (2-26 oz. per gallon) provides control of downy mildew and suppression of black rot, powdery mildew, and phomopsis. Applications can be made throughout the season. Copper can be used as a substitute for Captan in any mix, or as a late-season spray, but copper can cause injury on many grape varieties, especially after repeated applications or under slow drying conditions. Do not mix copper with oil. Copper controls downy mildew but provides only suppression of phomopsis, black rot, and powdery mildew, so it should not be depended upon for control of these diseases under high disease pressure. CAUSES INJURY ON COPPER-SENSITIVE VARIETIES. Sprayed at 2-26 oz. per gallon, one 16 oz. container of Bonide Copper makes 0.6 to 8 gallons of spray mix.

Customers often ask how many vines can be sprayed using one or more containers of a particular product. The answer is: it depends. All of the homeowner pesticides discussed in this article are applied by mixing a rate of product per gallon of water, and application should obtain thorough coverage of leaves and clusters. The number of vines you can spray with a gallon of spray mix will depend on the time of the season and the amount of growth on the vines. Commercial growers often spray at 50 GPA (gallons per acre) for pre-bloom sprays when the canopy is not yet completely filled, while later-season sprays might require 100-200 GPA to obtain good coverage.

2 responses to “Grape Pest Management for the Homeowner”