How To Grow Grapes - Grape Growing Guide for the Homeowner 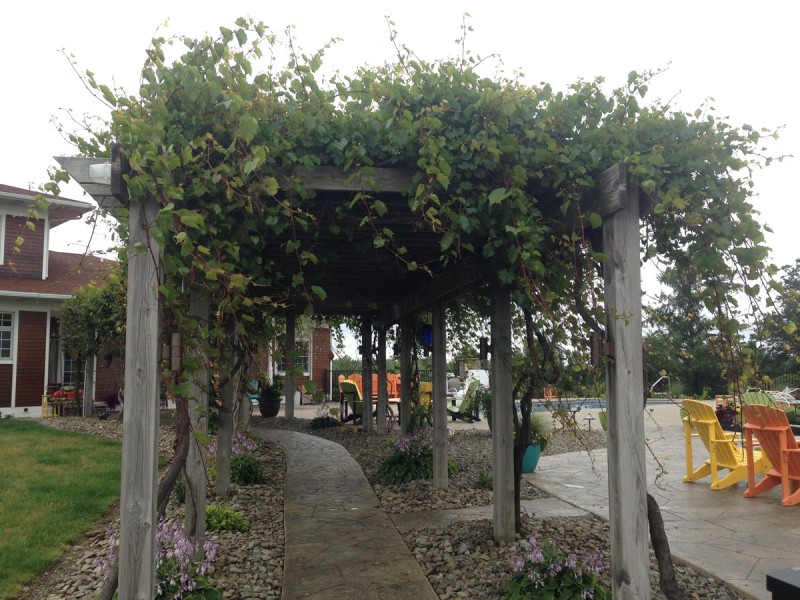 Over the years (25 and counting!), Double A Vineyards has built a large clientele with varied interests that range from commercial vineyard and winery owners to the backyard hobbyist. This article is aimed at the latter, especially our customers who decide they want to grow grapes or grapevines in their backyard, but who may or may not know what to expect. We hear almost daily from new growers: “I didn’t know what I was getting myself into.” Rest assured, even those of us who have chosen grape growing, winemaking, and perhaps even the grapevine nursery business, ask ourselves some variation of this question on a regular basis.

WHY DO YOU WANT TO GROW GRAPES?

There are a lot of answers to this question. The most common are “home winemaking,” “growing grapes to eat,” “shade from an arbor,” and my favorite, “I thought it would be cool.” These are all legitimate reasons to grow grapes, and they all require a basic understanding of what it takes to grow a grapevine to fruition (pun definitely intended).

WHAT DO GRAPEVINES NEED?

Everyone knows that plants need sun, water, and nutrients to grow, and this is true of grapevines. But grapevines also need good air movement and soil drainage to be grown successfully. Why is this? Although grapevines vary widely in their susceptibility to disease, every variety of grape is susceptible to one or (typically) more diseases or insects that can attack the leaves, fruit, and (sometimes) roots. While some intervention, typically in the form of pesticide application, is necessary to grow healthy leaves and fruit, grapevine access to sun, water, nutrients, good air movement, and soil drainage should be primary considerations when deciding where you should locate your vineyard.

SELECTING A LOCATION TO GROW GRAPES

This section could easily be titled, “Where should I plant my vines?” Or even better, “Where SHOULDN’T I plant my vines?” You should plant your vines in an open location that receives as much direct sunlight as possible, with good airflow, and which rarely (if ever) has standing water. Planting along a chain-link or similar type of fence on the perimeter of your property is OK as long as it is not shaded by trees. Planting along a solid wood fence is less desirable since air flow will be impeded and the vines will be in the shade for at least part of the day. Planting next to the house is usually a mistake since the vines will be growing in at least partial shade. Additionally, airflow will be impeded and soil may be saturated for several days, especially if located near gutter downspouts.

Grape varieties differ substantially in their susceptibility to diseases and insects, and grape growers differ in their willingness to apply measures (especially pesticides) to control them. Backyard growers should select varieties that are winter hardy at their location and are less susceptible to diseases such as black rot, powdery mildew, downy mildew, and botrytis. These diseases are endemic to humid regions across the United States. This information can be found in our Grapevine Variety Characteristic Chart. Growers need to understand that low susceptibility to disease does not mean the vines are immune to disease. During periods of extended rainfall, disease can become established on cultivars even with low disease susceptibility, and once they become established, disease inoculum will be present that can further spread the disease later in the growing season, as well as into the next season.

Regardless of what variety is selected and grown, some pesticide applications will likely be needed to grow healthy vines with disease-free fruit. Information about pesticides available to the homeowner can be found in a recent article on our website entitled “Grape Pest Management for the Homeowner.” Generally speaking, native and hybrid varieties are less susceptible to diseases than are vinifera. Vinifera varieties are especially problematic for the small grape grower as they are very susceptible to most or all of the major diseases and need to be sprayed more often than native and hybrid cultivars. Varieties that are susceptible to Botrytis and other fruit rots (including some hybrid cultivars) are especially problematic as there are no pesticide products available in homeowner-sized packages to control these diseases.

Grapevine arbors deserve some special consideration. Typically, the homeowner is looking for a shaded entry to the house, or perhaps a shaded backyard area during the summer. The photo that accompanies this article shows an attractive grapevine arbor at the Double A residence planted to 3309 Couderc (commonly referred to as 3309 or 3309C), a grapevine variety typically used as rootstock. Why 3309? It is winter hardy, disease resistant, and produces no fruit (it is a male-sterile variety). Winter hardiness means that you don’t have to worry about re-training from ground level following a harsh winter. Disease resistance means you never have to spray it (although, in a wet season, you may get some downy mildew established on the shaded parts of the canopy). No fruit means not dealing with birds that are attracted to ripening fruit and the associated bird droppings, nor over-ripe fruit falling to the sidewalk underneath the arbor. It may be possible to grow fruiting varieties on an arbor, but do you really want to walk, eat, or entertain guests in an area that requires pesticide applications and may have fallen fruit or bird droppings beneath the arbor, and may be attractive to bees if ripe or overripe fruit is present?

As mentioned, with the exception of growing grapevines on an open (chain-link) fence, training vines along a solid fence or next to the house is undesirable due to shade and lack of air movement. These unfavorable conditions impede drying of leaves and fruit, and lead to an increase in disease pressure.

Trellis construction is an art in itself, the goal is to install a trellis that requires little maintenance. Wood posts are usually preferred, especially if vines are trained to a high wire training system. Metal posts with notches for catch wires are more appropriate if a vertical shoot positioned system is used. Newly-planted grapevines can be trained on a bamboo stake during the first growing season. Depending on how much the vines grow the first year, a low wire may be necessary for vine training during the year of planting; in any case, trellis construction needs to be completed prior to the initiation of vine growth in the second year so that the vine can be attached to the trellis and trained to the desired system. Several links with references pertaining to training systems and trellis design and construction can be found at the end of this article.

One of the most common problems we see with grapevine establishment is lack of weed control. This is the time of year that we receive daily emails from new growers wondering why their vines are not thriving in the middle of a manicured lawn, or worse, in an unmowed field with weeds or sod towering over the newly-planted vines. Established grasses have extensive root systems that quickly overtake bare areas, such as the small weed-free patch you may have established around young vines. For further discussion about weed management in vineyards, view last month’s article.

Spacing of grapevines is determined by many factors, including inherent vigor of the variety and of the soil. Our Grapevine Characteristic Chart lists spacing most commonly used by commercial growers to produce these varieties, which is based on the optimum spacing to produce healthy vines with high quality fruit. Planting vines too close together can result in vine shading that results in poor fruit quality and an increase in disease and the need to spray fungicides. Planting vines too far apart results in less fruit production than is possible, which is an especially important consideration when space is limited. If there is sufficient space to produce the desired quantity of fruit, consider using wider spacing between vines to increase grapevine canopy exposure to sunlight and air movement around the vines.

We often get inquiries from our customers who find they have disease issues in their grapevines but who want to grow their fruit “organically.” Organic farming emphasizes cultural practices aimed at reducing chemical inputs (such as soil cultivation instead of herbicide use), and plant sanitation practices such as removing disease inoculum from the vineyard. However, the term “organic” is often confused with “grown without the use of pesticides,” and this notion is rarely true. Organic farmers typically follow guidelines established by state and federal agencies that prohibit the use of synthetic pesticides but allow the use of naturally-occurring substances with pest control activity.

Double A Vineyards offers several pesticides for the homeowner, some certified as organic, and some not. Organic pesticides include the following:

Elemental sulfur controls powdery mildew only. Unfortunately, many of the native and hybrid varieties that are less susceptible to certain diseases are sulfur-sensitive, meaning they are injured from sulfur application. Even varieties that are considered “sulfur tolerant” can be injured if applications are made when temperatures are above 85˚F.

Horticultural spray oil, a petroleum product, controls young powdery mildew infections and some insects by smothering them. Repeated use of oils can reduce grapevine photosynthesis and result in a decrease in fruit sugar content at harvest.

Copper fungicides provide good control of downy mildew, some control of powdery mildew, and only moderate control of black rot. Black rot is often referred to as the “Achilles Heel” of organic grape production in the Eastern US as there are no organically certified fungicides that provide the level of black rot control that can be obtained using certain synthetic fungicides. Repeated applications of copper often lead to injury to grapevine foliage and can be associated with reduced photosynthesis and sugar accumulation in fruit.

There are many reasons for wanting to become a grape grower. Being realistic about what you can grow at your location, where your vineyard should be located, and what inputs are needed will increase your likelihood of success.