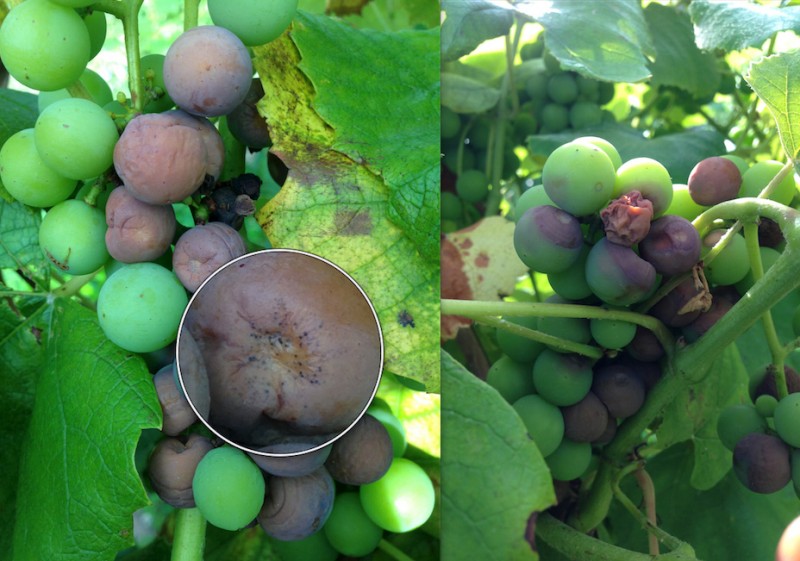 Part I provided an introduction to the major diseases that affect grapes and some options for early season disease control in vineyards. Please refer to that article for links to fact sheets for five major grape diseases – anthracnose, Phomopsis, black rot, downy mildew, and powdery mildew.

This article will focus on disease management considerations from bloom until harvest. Once again, I will rely on some of the excellent information developed for commercial grape growers through the Land Grant University system in the United States, including:

There are many other excellent resources available with information tailored to state and regional conditions. Serious grape growers should use these resources to develop an effective grape pest management program.

Most fungicides provide protection from the initiation of disease infections rather than eradication of existing infections. There are a few fungicides that provide limited eradication of existing disease infections, but essentially no fungicide has the capacity to “clean up” a raging case of disease. Because most fungicides act in a “protective” mode, they need to be applied to susceptible plant tissue PRIOR to environmental conditions that are conducive to disease development (and specific to each disease). These conditions include temperature, rainfall, hours of leaf wetness and/or humidity. As discussed in the previous article, a basic pre-bloom spray program for grapes includes a fungicide such as mancozeb (or captan or ziram) for control of Phomopsis, black rot, and downy mildew. Powdery mildew is not controlled with any of these materials, so additional fungicides are needed in an integrated spray program. There is wide variation in varietal susceptibility to powdery mildew. A complicating factor is that the powdery mildew fungus is prone to the development of resistant strains to specific fungicides after repeated applications. For this reason, effective spray programs for powdery mildew use two or more different fungicide classes on a rotational basis to prevent or delay the onset of the development of fungicide-resistant strains of powdery mildew. Fungicides with post-infection activity against powdery mildew are often tank-mixed with protective fungicides, especially during periods of high disease pressure and when grapevine tissue is most susceptible to disease.

DISEASE CONCERNS FROM BLOOM UNTIL HARVEST

Varietal susceptibility to diseases and local environmental conditions play a large role in determining a basic grape pest management spray program. For example, in western New York, a commercial ‘Concord’ grower may spray four times (more or less) for acceptable disease control, but a vinifera grower will often spray 10-12 times or more to obtain control of all major fungal diseases. Grape variety disease susceptibility ratings can be found in our “Grapevine Variety Characteristics Chart” and in university-published pest control guidelines.

Phomopsis is primarily an early season disease, with most infections occurring before and soon after bloom. Inclusion of mancozeb (NOTE: mancozeb products have a 66 day pre-harvest interval (PHI), and cannot be legally used after that time), captan, or ziram in cover sprays applied through the second post-bloom spray should be sufficient for control of Phomopsis under most conditions. Some of the strobilurin fungicides (Abound®, Sovran®, Pristine®) also provide control.

Downy mildew infections can occur during the season as early as two to three weeks pre-bloom, and have the potential to “explode” under warm, wet, humid conditions. This scenario can result in premature defoliation of vines that can lead to poor fruit quality and reduced winter hardiness. Mancozeb (66 day PHI) and captan (up to 14 day PHI depending on the product label) provide effective control; ziram (14 day PHI) is somewhat less effective. Some of the strobilurin fungicides (Abound® and Pristine®) also provide effective control (Sovran®, less so). Other chemistries that provide effective control of downy mildew include, Revus® and Revus Top®, Ranman® and Ridomil®. Ridomil® is highly effective in controlling downy mildew, but is also at very high risk of developing disease resistance and should be used sparingly (i.e. no more than one application per season) under severe disease pressure. Copper fungicides can provide effective control of downy mildew, but some grape varieties are sensitive to injury (consult University guidelines and product labels to determine varietal copper sensitivity). Phosphorous acid (PA) products such as Phostrol® provide mainly post-infection control of downy mildew, but are prone to resistance development if overused.

Mancozeb, captan, ziram and copper have been used for decades and are at low risk for developing disease resistance. Fungicides that have been developed more recently usually work by interfering with a single process in fungal metabolism, typically a specific site of one specific fungal enzyme involved in the process. Hence, newly developed fungicides are almost always more prone to disease resistance development than are older ones. Wayne Wilcox discusses fungicide resistance beginning on page 10 of “2017 & 2018 Grape Disease Control”.

The number of pesticide applications aimed at controlling downy mildew is highly variable and depends on varietal susceptibility, weather conditions, and the amount of inoculum present in the vineyard. Like most efforts at disease control, prevention is the best medicine. The downy mildew fungus becomes active at about 10” shoot growth and infections occur with 0.1” rainfall and temperatures above 50°F. Pesticide applications aimed at controlling downy mildew on susceptible varieties should begin at about 10” shoot growth if wet conditions are anticipated. Young foliage is particularly susceptible, so several pesticide applications at 7 to 10 day intervals prior to bloom and 10 to 14 days after bloom, until about 4 weeks post-bloom, may be necessary to minimize primary infections. Once primary infections have occurred, secondary infections can occur within 4 or 5 days when there is high relative humidity at night. Disease pressure is increased with repeated humid nights, frequent rainfall, and cloudy weather. Under these conditions, downy mildew infections can explode and lead to early defoliation of vines. On susceptible varieties, once primary infections become established, a downy mildew fungicide may need to be included in spray applications every two weeks or so until early fall.

Powdery mildew infections can occur throughout the growing season, but some varieties (such as most vinifera) are much more susceptible to infections than others (such as Concord and certain other native and hybrid varieties). The powdery mildew fungus overwinters in fruiting bodies in the bark of grapevines. Spores produced from these fruiting bodies produce primary infections, and then secondary infections occur from spores released from the primary infections. Under ideal conditions (temperatures in the mid-60s to mid-80s Fahrenheit and high relative humidity), a new generation can be produced every 5-7 days. Similar to downy mildew, powdery mildew infections can explode in a short period of time and can infect leaves, clusters, and young berries.

There are five distinct classes of synthetic powdery mildew fungicides registered for use in grape in the United States:

Typically, two or more of these chemistries are used on a rotational basis by commercial grape growers, since repeated applications of the same product or products within the same chemical family can lead to the development of powdery mildew resistant strains. There are several factors that need to be considered when developing an effective powdery mildew spray program for grapes, including:

Consult University guidelines and pesticide labels for use guidelines and restrictions. I’ll say it one more time – “the label is the law” and the user is responsible for applying pesticides in accordance with the label.

Sulfur has been used for powdery mildew control in grapes for centuries and is not prone to resistance development, but there are cautions regarding the use of sulfur in grapes:

• Certain varieties are susceptible to sulfur injury (i.e., the cure is worse than the disease). Consult our “Grapevine Variety Characteristics Chart” or consult guidelines developed for your state or region.

• Sulfur is washed off with rainfall, so it provides little or no protection under rainy conditions. Many growers tank mix other fungicides with sulfur to obtain limited eradicant (sulfur) and protective (synthetic fungicide) activity against powdery mildew; this is recognized as a sound disease resistance management strategy.

• Late season sulfur applications may need to be avoided in order to avoid sulfur odors in finished wine.

Another fungicide that provides post-infection control of powdery mildew is JMS Stylet Oil®. If applied properly, stylet oil can eradicate powdery mildew infections from leaf surfaces by smothering it. However, there are cautions regarding the use of stylet oil in grapes including:

• Overuse can lead to reduced photosynthesis and lower sugar content in harvested grapes.

• There are incompatibility issues with several fungicides including sulfur and captan.

Once again, consult pesticide labels and University guidelines for restrictions.

While sulfur, stylet oil, and Nutrol® provide some post-infection activity against powdery mildew, they are all washed off with rainfall and must be applied often when there are rainy conditions in order to be effective. Commercial grape growers often use these products in conjunction with synthetic fungicides rather than as a substitute for them. In other words, the addition of a post-infection powdery mildew material with a protective fungicide can help control disease infections that have already occurred. This should be considered a sound disease resistance strategy when used properly in an integrated pest management program.

The number of pesticide applications needed to control powdery mildew is highly dependent upon varietal susceptibility. On vinifera and other highly susceptible cultivars, powdery mildew sprays may need to begin as early as the 3-5” shoot growth stage. Succulent foliage, flower clusters, and young berries are highly susceptible to infection, so sprays may need to be applied every 7-10 days prior to bloom, and every 10-14 days post-bloom until veraison or later. Less susceptible cultivars such as Concord may only need 3 or 4 sprays for acceptable control. The immediate pre-bloom and post-bloom sprays are the most critical for control of powdery mildew.

Botrytis and other fruit rots are the final topic of this article. A Cornell University fact sheet on Botrytis can be found at:https://ecommons.cornell.edu/bitstream/handle/1813/43080/botrytis-rot-blight-FS-NYSIPM.pdf?sequence=1&isAllowed=y .

Botrytis is a fungus that can damage blossoms, leaves, and shoots, but it is most notorious by causing bunch rot to ripening fruit. Tight-clustered varieties are most susceptible to the fruit rot phase of the disease, but infection can also occur through wounds caused by insects, hail, or fruit splitting from excessive rainfall. Infections that occur on aging flower parts can cause latent infections that become active during fruit ripening. Cultural practices that encourage air movement through the canopy can reduce disease pressure, but chemical control is often needed on susceptible varieties when there are suitable conditions for infection. All fungicides that control Botrytis are also susceptible to resistance development and should be used in a rotational program to minimize this risk. Optimal timing of applications is dependent on varietal susceptibility and weather conditions, and can include applications at late bloom, bunch close, veraison, and 2-3 weeks pre-harvest. Many grape varieties, especially those with thick-skinned berries and loose clusters, do not typically need to be sprayed for botrytis.

1) Rovral® and generic iprodione products.
2) Vangard® and Switch® (a combination product of cyprodinil, the active ingredient in Vangard, and fludioxonil which has activity on Botrytis and certain spoilage rots.
3) Elevate®
4) Certain strobilurins including Pristine® and Flint®.
5) Endura® (one of the active ingredients in Pristine®)

Fungicides in each of these groups should not be used more than once or twice per season for Botrytis control, and should be used on a rotational basis. Captan and Pristine® have activity on certain spoilage rots (check product labels for specific recommendations). Some products have a PHI up to 14 days pre-harvest which should be considered when making late season applications.

Effective grape disease management programs depend on many factors including varietal sensitivity to the major diseases, weather conditions, disease susceptibility to the different groups of fungicide, the risk of fungicide toxicity to different varieties, the risk of developing resistant populations of fungi, and cost. As discussed throughout this article, there are a lot of effective fungicides available, but there are also many factors that need to be considered when developing an effective spray program.

Specific guidelines for your state or region can be found online or through Cooperative Extension programs, but it is the user’s responsibility to read product labels and comply with local, state, and federal guidelines.