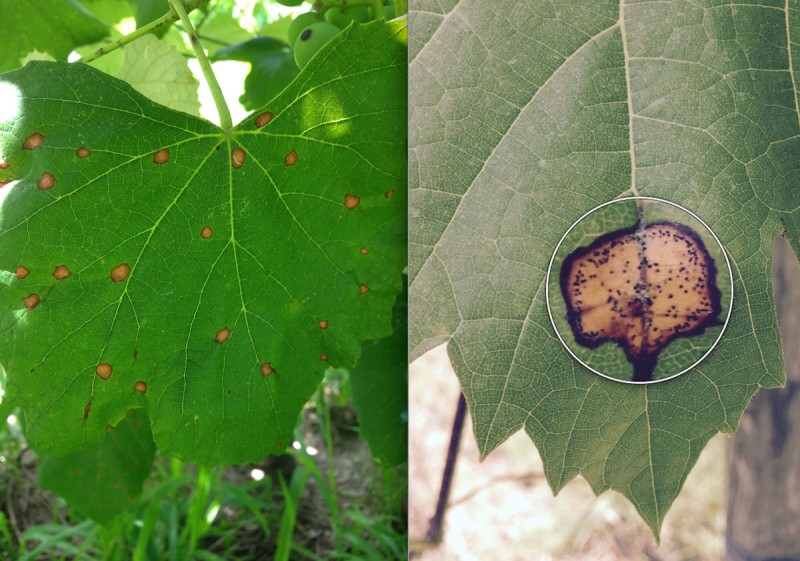 Managing disease is a key component to successful grape production. Cultural practices and variety selection can have a large impact on disease pressure and susceptibility, but most grape growers rely, to some extent, on chemical fungicide applications in order to produce disease-free fruit and foliage for the production of high quality fruit and wine. This article will introduce the major diseases that affect grapes, with an emphasis on cultural practices that can reduce disease inoculum in vineyards. I’ll also discuss early-season disease management from dormancy until early bloom. “Part 2” will focus on grapevine disease control from bloom through harvest.

The information included in this article is a guideline for planning an early-season pest management program for your vineyard; when using pesticides in your vineyard operation it is your responsibility to comply with local, state, and federal guidelines, and to observe label restrictions. As they say, “the label is the law”.

Many states with established grape industries publish annual pest management guidelines. University guidelines should be used to determine pesticide use appropriate for your location.

Guidelines for other states can be found online or at your local Cooperative Extension office. Remember: if you use pesticides in your vineyard operation, it is your responsibility to read the product labels and comply with local, state, and federal guidelines.

With his permission, much of the information in this article is a brief review of “2017 & 2018 Grape Disease Control” by Dr. Wayne F. Wilcox, Department of Plant Pathology, Cornell University. This article contains a wealth of information and I consider it “must read” for serious grape growers in humid regions of the United States.

Anthracnose is not a common disease in many regions, but where it occurs it can be very damaging. While there are differences in varietal susceptibility, anthracnose is more common in the warmer and more humid regions of the United States, and is most prevalent in wet years. I have never heard of a Lake Erie region Concord grower spraying for anthracnose, but it is a common practice in Concord vineyards in Arkansas. There is wide variation in varietal susceptibility. Wayne Wilcox lists Vidal, Reliance, and some other seedless cultivars as being susceptible, with some reports of disease in Concord, Catawba, and Lean Millot, more commonly in the Midwest than NY/PA. He also notes susceptibility of some of the cold hardy varieties with V. riparia in their backgroud; Marquette is particularly susceptible, other varieties mentioned include Frontenac, La Crescent, Edelweiss, Espirit, Brianna, St. Pepin, and Swenson White.

Dr. Mike Ellis at Ohio State University has published a fact sheet on anthracnose. All succulent parts of grapevines are susceptible to infection by anthracnose and Mike’s article includes several photographs to assist in identification of the disease. Several steps are recommended for management of the disease, including sanitation by pruning out infected wood and removing it from the vineyard, burying infected fruit with soil or mulch, eliminating wild grapes near the vineyard, maintaining an open canopy to improve airflow, and using fungicides. According to Wayne Wilcox, early-season sprays of mancozeb, captan, and ziram targeted against other diseases also provide significant control of anthracnose, although anthracnose is not listed on most product labels. The sterol inhibitor or DMI fungicides tend to have good activity on anthracnose, and Rally, Mettle, and Revus Top are specifically labeled for anthracnose control. Pristine is labeled for anthracnose control, but Pristine is usually saved for sprays at or after bloom. A “delayed dormant” application of lime sulfur can be very effective where anthracnose has become established; this treatment limits spore production from overwintered disease cankers but does not protect new growth from spores that are produced. As a note of caution, although lime sulfur may be considered an “organic” treatment, it is a highly caustic and corrosive material that can cause irreversible eye damage and skin burns. As with all pesticide products, users should follow precautionary statements and use personal protective equipment (PPE) described on product labels.

Phomopsis is a fungal pathogen that (like anthracnose) can infect all succulent tissue on grapevines if conditions are favorable. Infections that occur on the developing rachis when clusters first become visible at about 3” shoot growth are most damaging and can result in severe fruit loss. Infections at the base of green shoots weaken them and make them more susceptible to breakage, and infected wood left in the trellis can serve as a source of infection for many years. Hence, cordon-trained vines are more susceptible to disease buildup than are cane pruned vines, with hedge pruned Concord and Niagara vineyards in the Lake Erie region arguably qualifying as “poster children” for the disease.

There are several fungicides that provide effective control. Mancozeb, captan, and ziram all provide effective control of Phomopsis; these are protective materials that must be applied prior to infection. Cornell guidelines list strobilurin fungicides such and Pristine®, Abound®, Flint®, and Sovran® as providing moderate control, with copper providing only slight control. Where disease pressure is high due to weather conditions, varietal susceptibility, and training system (the presence of older, infected wood), several sprays beginning at the visible cluster stage through fruit set may be warranted.

Black rot is another fungal pathogen that thrives in warm, humid climates, and is prevalent across the eastern and midwestern United States. The disease gets started by spores blowing in from distant infections on wild grapevines, or from mummified berries from the previous year’s infections in the vineyard. Infections spread from leaves and then to fruit, and can result in complete crop loss under severe conditions. Removing “mummies” from the vineyard during pruning removes the largest source of inoculum for infection in subsequent years, and dropping mummies to the ground is better than leaving them hanging in the trellis.

Several fungicides provide effective control, including mancozeb and ziram as listed above under Phomopsis control. Captan also provides some control, but is not as effective as mancozeb and ziram. Copper only provides slight control. Cornell guidelines list strobilurin fungicides such as Pristine®, Abound®, Flint®, and Sovran® as providing excellent control, as well as some of the DMI fungicides including Revus Top®, Rally®, Mettle®, and tebuconazole. Effective sprays applied from 2-3 weeks prior to bloom to 2-3 weeks after bloom usually provide acceptable control, by limiting the seasonal inoculum harbored in the vines.

Downy mildew is yet another fungal pathogen prevalent in warm, humid regions. Frequent rainfall and high humidity can promote downy mildew epidemics. Under the right conditions, downy mildew infections can “explode” and defoliate grapevines prematurely, making them more susceptible to winter injury. Primary infections occur when spores spread from leaf litter on the ground to young leaves and clusters, beginning about 2-3 weeks prior to bloom. Secondary infections occur when spores produced on leaf infections spread during nighttime periods with very high relative humidity; once the disease is established in the vineyard, secondary infections can occur late into the growing season. Practices that encourage air circulation and speed drying time can reduce disease pressure, but fungicide sprays are often needed. There is wide varietal susceptibility to downy mildew.

Fungicides that control Phomopsis and/or black rot early in the season, such as mancozeb and captan, also provide good preventative control of downy mildew. Ziram provides some control of downy mildew but is not as effective as mancozeb and captan. Copper provides good control but note that copper can cause injury to grapevine foliage, especially when leaves are succulent and downy mildew while control with Sovran® is only fair. DMI fungicides, including Rally®, Mettle®, and tebuconazole, (and also the “Top” component of Revus Top®) provide no control of downy mildew. Revus® and Revus Top® (via the mandipropamid component) provide excellent control, as does Ridomil®, and Ranman® provides good control. Ridomil® is downy mildew specific, relatively expensive, and very prone to disease resistance development, hence, Ridomil® is only labeled for use in grapes as a pre-mix with mancozeb or copper. Phosphorous acid (PA) products (such as Phostrol®) provide primarily post-infection control of downy mildew. Other than mancozeb, captan, ziram, and copper, all the fungicides listed as “effective” are prone to disease resistance development and should be used in within a sound, integrated pest management program.

Powdery mildew has been described as “perhaps the most important fungal disease of grapevines worldwide” (Wayne Wilcox). Uncontrolled powdery mildew can destroy infected clusters and cause “diffuse” cluster infections that increase their susceptibility to bunch rots. Leaf infections can limit photosynthesis and reduce fruit quality, vine growth, and winter hardiness. Maintaining an open canopy that allows sunlight to penetrate into the canopy can reduce disease pressure, as can keeping vines relatively free of disease using appropriate fungicide-based disease management programs. Once established, powdery mildew infections can multiply rapidly. Rainfall is not necessary to spread the infections. Hence, early-season sprays are critical on susceptible varieties in order to avoid an epidemic. Unfortunately, fungicides that provide preventative control of Phomopsis, black rot, and downy mildew, such as mancozeb, captan, and ziram – DO NOT provide effective control of powdery mildew.

Sulfur Sensitivity. Elemental sulfur can provide very effective powdery mildew control, with both preventative and curative action. Disease resistance development is not a concern. However, rainfall washes off sulfur coverage, and new shoot growth is not protected, so sulfur needs to be applied frequently in order to provide season-long control. Additionally, some grape varieties are susceptible to foliar injury from sulfur, and sulfur applications should be avoided on these varieties. Sulfur sensitivity of many varieties can be found in our “Grapevine Variety Characteristics Chart”.

Note: Revus Top®, Flint®, and Pristine® fungicides are phytotoxic to certain grape cultivars, and Abound® is phytotoxic to many apple varieties. Consult pesticide labels for use guidelines and restrictions.

Repeated use of any single chemistry will eventually result in resistant strains of powdery mildew that are no longer controlled with applications of fungicides within that chemistry. At least two, and preferably more of these chemistries are used in commercial grape production on a rotational basis to avoid or delay the onset of disease resistance.

1) Overuse can lead to reduced photosynthesis and lower sugar content in harvested grapes.
2) There are incompatibility issues with several fungicides including sulfur and captan.

Once again, consult pesticide labels and University guidelines for restrictions.

While sulfur, stylet oil, and Nutrol® provide some post-infection activity against powdery mildew and are not prone to disease resistance development, they are all washed off with rainfall and must be applied often under rainy conditions in order to be effective. Commercial grape growers often use these products in conjunction with synthetic fungicides rather than as a substitute for them. In other words, the addition of a post-infection powdery mildew material with a protective fungicide, especially at critical times when grape tissue is most susceptible, can help control disease infections that have already occurred. This should be considered a sound disease resistance strategy when used properly in an integrated pest management program.

University researchers have developed “integrated” pest management programs that aim to provide acceptable levels of control of all the major diseases affecting grapevines. Programs are developed based on varietal susceptibility to disease and the amount of disease inoculum carried over from previous seasons. Typical pre-bloom spray programs include a fungicide such as mancozeb to provide protection against infection by Phomopsis, black rot, and downy mildew, and also one or more of the fungicides that control powdery mildew, depending on varietal susceptibility. In western New York, commercial grape growers of native varieties such as Concord often apply as few as two pre-bloom fungicide applications, while vinifera growers can apply several sprays, beginning at early shoot growth, at 7-10 day intervals.

3 responses to “Disease Management Programs for Grapes – Part I”