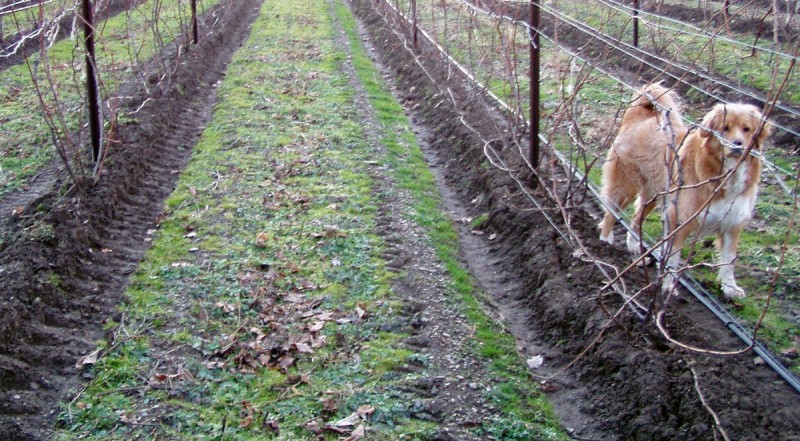 As the 2011 growing season comes to an end, we all know what comes next – winter. In areas where extreme cold temperature or temperature drops occur, winter protection of grapevines may be necessary. By their nature, grafted vines are most susceptible to winter injury, particularly at the graft union. Own-rooted vines are also susceptible to winter injury if temperatures exceed their level of winter hardiness. This article is intended primarily for growers of grafted vines where sub-zero (Fahrenheit) temperatures are likely or possible, but the cane burial techniques discussed can also be used with own-rooted vines grown in extreme climates.

Cold temperatures can kill parts or all of grapevines, depending on the variety and location of the vines. All grape varieties have a level of inherent hardiness; our catalog lists varieties by their level of anticipated hardiness using the “USDA winter hardiness” zones map. Elaborate methods of winter protection are generally not necessary for own-rooted vines grown within their USDA hardiness zone. However, varieties grown where temperatures are colder than their inherent hardiness may need winter protection. Grafted vines are susceptible to winter injury when temperatures fall much below 0°F. They are also susceptible when sudden temperature drops occur, regardless of the cold hardiness level of the scion variety. Areas with continental climates, away from the moderating effects of oceans or other large bodies of water that do not freeze over in the winter, are particularly susceptible to winter injury to grapevines when sudden temperature drops occur.

Winter Injury Avoidance
1. Vineyard site selection. Choose sites with good air drainage so cold air tends to move away from the vineyard. As mentioned, maritime sites are preferred because of the moderating effect of open bodies of water on air temperature.

2. Variety selection. Choose varieties that are hardy at your location. As the saying goes, “It only takes one night” for damage to occur. Absolute cold temperature is the most important factor, but the duration of the temperature extreme also plays a role.

4. Winter protection techniques such as covering graft unions and/or fruiting wood on cold-sensitive varieties. Covering (and uncovering) vines on an annual basis is an expensive, labor-intensive method of providing additional winter protection, but may be necessary to ensure live vines and/or fruiting canes for the following season.

Methods of winter protection
1. Insulating with soil. Soil serves as an excellent source of insulation, and winter temperatures just a few inches below the soil surface are rarely more than a few degrees below freezing even with much colder air temperatures. Commercial growers often use a mechanical grape hoe to mound up soil in the fall, and then to remove the mound in the spring. Graft unions on grafted vines should be covered with at least a few inches of soil for the winter months, and the mound should be removed in the spring to prevent scion rooting (roots growing from the scion variety rather than the rootstock variety). If desired, canes can be buried for protection in the winter, and the mound should be removed in the spring so the process can be repeated the following year.

2. Insulating with mulch. Straw, hay, wood chips, and compost can all be used to provide insulation around vines. Several tons of material may be necessary to cover an acre of vines, so the time and expense associated with this practice should be considered. It is certainly a viable practice for growers with small vineyards.

Special considerations when using grafted vines
Grafted vines are often used in grape production as rootstocks can impart desired characteristics to the vines. The introduction of phylloxera to Europe from North America in the 19th century led to the decline and death of European vinifera vineyards. Grafting phylloxera-susceptible cultivars onto phylloxera-resistant rootstocks led to the recovery of the European grape and wine industry. Rootstocks can also provide resistance to nematodes and viruses, and can impart desired growth characteristics to the vines, such as vigor control. However, the graft union is most susceptible to winter injury. In locations where graft unions may be exposed to sub-zero Fahrenheit temperatures, they must be protected over the winter in order to avoid damage. For this reason, it is CRITICAL that graft unions be planted no more than 1-2” above ground level so soil or other insulating materials can be applied to cover the graft unions during the winter months.

The Michigan State University publication Winter Injury to Grapevines and Methods of Protection, written by experts from Michigan, Ohio, New York, and Pennsylvania, is the authoritative publication on this topic.

One response to “Winter Protection of Grapevines”