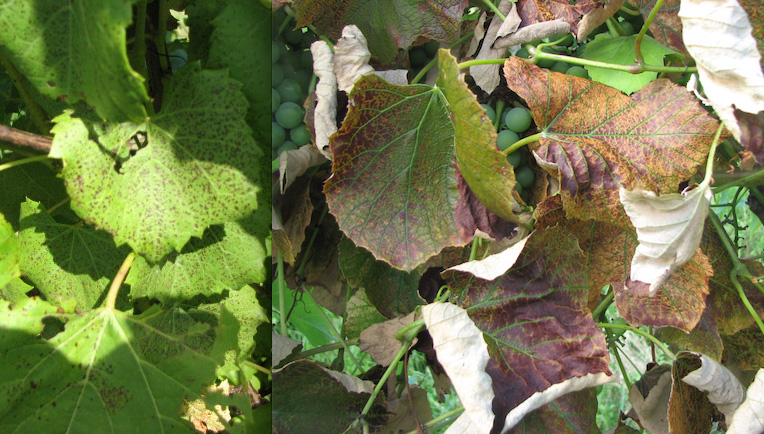 Powdery mildew (PM) is an important vineyard disease worldwide.  As pointed out by Cornell University grape plant pathologist Wayne Wilcox, Eastern North America is the origin of powdery mildew, and we cannot grow grapes here without controlling it.  Sulfur is a traditional material used to control powdery mildew, but grape cultivars differ widely in their susceptibility to injury from sulfur applications.

In warmer climates such as California, powdery mildew overwinters in infected buds that produce mildewed “flag shoots”.   In cooler climates, it overwinters as minute fruiting bodies called cleistothecia that lodge in the bark of vines.  In either case, fungal spores (ascospores) are released in the spring and infect new foliage and young clusters.  Subsequent spore release (from conidia) results in further disease development during the season, although grape varieties vary widely in their susceptibility to the disease.

Sulfur has been used to control powdery mildew around the world in many crops for about 150 years with no development of resistant strains of powdery mildew [1].  Sulfur is both inexpensive and effective in controlling powdery mildew, but it has limitations.  Sulfur provides very good protective activity on sprayed tissues (until it is washed off by rain), but not on new leaves that emerge after the last application. Wilcox’ research has shown that sulfur provides excellent post-infection control of PM until the time that young colonies start to become obvious, but post-infection sprays applied to heavily-diseased tissues are much less effective than those applied to incubating or very young colonies [2].  Some formulations of sulfur are considered “organic” (OMRI listed), and commercial grape growers often tank mix sulfur with synthetic powdery mildew fungicides as a disease resistance management strategy.

Grape cultivars differ widely in their susceptibility to sulfur injury.  Most vinifera varieties are sulfur tolerant (there are exceptions), and can be sprayed throughout the growing season without injury, but even sulfur-tolerant varieties can be injured if sprayed when temperatures are above 85°F.  Growers are advised to check with their buyers regarding cutoff dates for sulfur applications, as late season applications can result in off-odors and flavors in finished wine.  Many native and hybrid varieties are sulfur-sensitive, and some are susceptible to debilitating effects from sulfur injury.  For example, in a 2-year study (1991-1992) conducted at Cornell’s Vineyard Laboratory in Fredonia, NY, four annual applications of 4 lb. Microthiol 80DF reduced ‘Concord’ percent trellis fill, cane pruning weight, and yield by 31%, 34%, and 48%, respectively [3].

Double A Vineyards maintains about 40 acres of variety blocks for vine propagation.  In both 2011 and 2012, we intentionally sprayed our propagation blocks with two post-bloom applications of 6 lb. Microthiol DF at two week intervals, in order to update the information on sulfur sensitivity provided in our Grapevine Variety Characteristic Chart.  Each variety was rated on a scale of 0-2 for sulfur injury, based on a scale developed by Dr. Wayne Wilcox (Cornell), Dr. Lance Cadle-Davidson (USDA), and me in 2009 (photos accompany this article).  Our injury scale is: 0 = no apparent injury in either 2011 or 2012; 1 = minor visible injury observed in 2011 and/or 2012; and 2 = substantial visible injury observed in 2011 and/or 2012. On some varieties, injury was more severe in 2012 under warmer and drier conditions, and the higher rating is indicated in our chart.  In practical terms, a “2” rating on our sulfur injury scale indicates substantial risk to vine health and productivity from sulfur injury, and sulfur application is strongly advised against.  A “1” rating indicates some minor injury may be observed, and caution is advised, especially when air temperatures are 85°F or above at the time of application.  In cases where Double A Vineyards does not grow our own propagation wood on premises, we rely on information provided by various University sources, especially Cornell, Ohio State, Virginia Tech, and local growers.

The sulfur sensitivity information in our updated Grapevine Variety Characteristic Chart is meant as a guideline that represents our experience, and that of others, to assist you in determining the advisability of including sulfur in your disease management program, but does not guarantee that greater injury may occur from sulfur applications made under different conditions.  We hope you find this information useful!

One response to “Sulfur Injury on Grapevines”