What is Pierce’s Disease of Grape? - Double A Vineyards 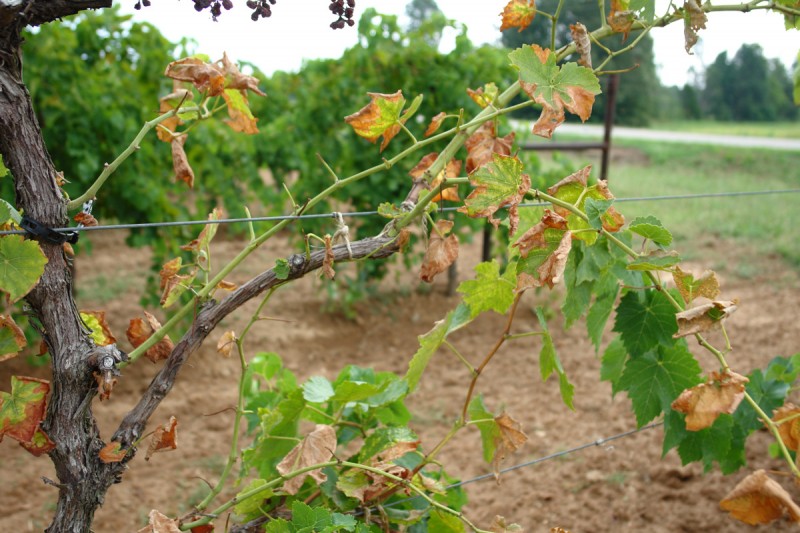 Grape growers in southern regions of the United States face a potential problem not encountered by growers in more northern regions–Pierce’s disease (PD) of grape.  An excellent resource, Pierce’s Disease Overview and Management Guide – A Resource For Grape Growers in Texas and Other Eastern U.S. Growing Regions, has recently been published by a team of researchers at Texas AgriLife Extension Service and the University of Houston-Downtown.  This article will provide a brief summary of the information provided in this publication, as well as information about grape varietal susceptibility to this potentially devastating disease.

The link for the PD Overview and Management Guide can be found at:
http://aggie-horticulture.tamu.edu/fruit-nut/files/2010/10/Texas-Grape-Growers-PD-Management-Guide.pdf

Pierce’s disease was first reported near Anaheim, Californiain 1883, and by 1885 about half of the vineyard acreage near Anaheim was dead.  In the 1920s, Central Valley vineyards were affected, and by the 1930s, the first statewide epidemic was reported in California.  The disease has always been cyclic, but the introduction of Glassy-winged sharp shooter into southern California in the late 1990s dramatically changed the threat this disease poses in California.  Since then, numerous researchers have begun to unravel the origins and cause of the disease on both sides of the Rocky Mountains. Researchers now understand that PD moved from Texas to California on infected nursery stock, and it is now endemic in many parts of California.  Unfortunately, and for reasons not completely understood, the known range of Pierce’s Disease has moved further north than originally thought, into northern areas of the Gulf States, southern Missouri, Arizona and New Mexico and coastal areas of North Carolina and Virginia.  Possible reasons for the northern spread of PD include warmer climate, increased cold hardiness of the pathogen, and, as Jim likes to say “an increase in researchers looking for the disease.”

Pierce’s disease is caused by Xylella fastidiosa, a xylem-limited bacterium native to the Southeastern United States vectored by several insect pests, mainly xylemfeeding Cicadellid insect species.  Fortunately, the disease is intolerant to cold temperatures which limit the spread of the disease to more northern growing areas.

Symptoms of Pierce’s disease include leaf scorch, abscised leaf blades with retained petioles, uneven periderm formation, and shoot and cluster collapse (additional photos and information can be found at the links listed below). Once vines are infected, the disease can spread to additional vines, vectored by insects that contain the disease bacterium.   Vitis species vary greatly in their response to Pierce’s disease.  V.Labruscana, V. vinifera, and French-American varieties are susceptible to PD, but cultivars vary greatly in field longevity once infection has occurred. Other species and varieties are tolerant to the disease, meaning they have the ability to sustain infections by the pathogen with no reduction in yield.  Tolerant vines include ‘BlackSpanish’, ‘Blanc du Bois’, and most wild Vitis species native to the Gulf Coast and southeastern United States.  Finally, additional species and cultivars are resistant to PD, meaning they have the ability to limit colonization by the pathogen.  Resistant vines include Vitis arizonica, V. smallii, and some interesting new selections being developed in California by Dr. Andy Walker by crossing V.arizonica with traditional vinifera cultivars.

Management of Pierce’s disease is discussed at length in the Texas AgriLife publication.  In PD susceptible areas, sites should be chosen with limited or little to no perennial vegetation that harbors the insect vectors. Sites with perennial vegetation and access to water during the summer should be avoided.  Buffer areas of several hundred feet from perennial vegetation should be created, and susceptible hosts removed.  Insect vector control can be achieved using neonicotenoid insecticides, especially if applied through a drip irrigation system.   Vegetation in and around the vineyard should be mowed frequently to discourage attraction to insect vectors.  Infected vines should be removed from the vineyard as soon as disease symptoms become apparent to prevent disease spread to neighboring vines. 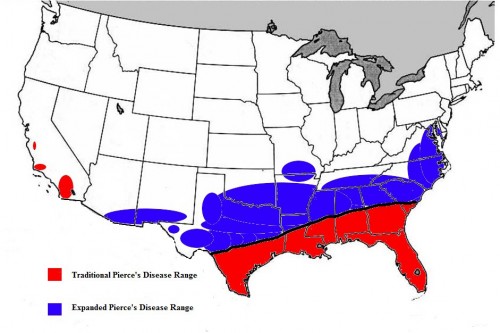 Current research in Texas focuses on the evaluation of resistant and tolerant grape varieties and rootstocks.  The University of Arkansas, Texas AgriLifeand Tarkington Vineyards have released ‘Victoria Red’, a new PD tolerant variety that holds strong promise for home and limited commercial production along the Gulf Coast.  Dr. Andy Walkerand others are using resistant native species with continued backcrossing with vinifera to produce new selections. Ongoing evaluation suggests some of these new selections are fully resistant to PD and exhibit high wine quality similar to their vinifera parents.  Another line of research involves intentionally infecting vines with non-virulent strains of Xyllella.  This appears to protect grapevines from infection by virulent strains of PD.

“We consider most vinifera cultivars to be susceptible, but there is variation in how quickly vines exhibit symptoms.  ‘Chardonnay’ and ‘Sangiovese’ become symptomatic very soon after infection in warm climates but other varieties such as ‘Cabernet Sauvignon’ may take several years to show leaf scorch.  We have learned quite a lot about grapevine response to Xylella over the past ten years and the first point we need to think about is that inoculation does not necessarily mean infection.  One of the things that drives vine responseto this pathogen is the frequency and efficiency of being fed upon by vectors carrying the pathogen.  The response of ‘Norton’ is a prime example.  In the Gulf Coast of Texas where the disease pressure is severe, we expect that vines will be challenged by hot vectors many times a day. Under these conditions, ‘Norton’ will slowly start to exhibit symptoms, slowly start to decline, and lose vine size and productivity.  After a number of years, the vines are simply not productive and are usually removed by the grower.  We have pruned some of these declined vines to the ground and they produce vigorous new trunks that once again can return the vines to a moderate state of productivity, but they decline again pretty rapidly.  When ‘Norton’ vines are planted on low disease pressure vines in the Texas Hill Country, and cultural practices are followed to manage vectors and the disease, we expect that perhaps the vines are fed upon by competent vectors once or twice a week.  So far, under these conditions, ‘Norton’ has grown and been productive for at least ten years without a loss of vigor or productivity.”

“Similar experiences have been seen with ‘Chambourcin’, but in these cases it is typically vineyard management practices that affect vine longevity.When properly managed, and sustainable crop levels are produced,’Chambourcin’ will live for years with the disease.  But those who have grown ‘Chambourcin’ know all too well that it is prone to setting large crops.  When ‘Chambourcin’ is consistently overcropped, it declines and dies very rapidly. The same is generally true with ‘Villard Blanc’; it holds up to PD pretty well, but must be cared for and not overcropped.  ‘Villard Blanc’ has been used as a parent in breeding programs for powdery mildew resistance, but has apparently also provided some of the PD tolerance to varieties such as ‘Victoria Red’,’Phoenix’ and ‘Orion’.  All of these varieties with tolerance will show some symptoms, especially under heat and drought stress, but it’s their ability to maintain vine size and productivity that’s important.”

“In the northern parts of what we now consider the expanded PD zone, this pathogen is not always lethal.  Even though PD symptoms can be found in vineyards, cold temperatures appear to limit the degree of colonization of the vine.  Accordingly, we have come to view Xylella infection as a stress.  In areas that do not receive enough cold temperatures to affect the pathogen, this stress is acute and can (and does) kill grapevines.  In more northern areas, it is more of a chronic stress.  Combine Xylella infection with overcropping, drought stress, poor vineyard floor management, or any other factor that negatively affects vine health, and the effects of the disease are magnified.”

In summary, much has been learned about Pierce’s disease in the past decade.  The research conducted in Texas, especially, has provided insight into the spread of the disease tomore northern climates, has identified numerous insect vectors, and has developed integrated management techniques to limit the spread of the disease in vineyards.  Additionally, several researchers are evaluating new and old cultivars with increased resistance to the disease.  This article has provided only a brief summary of these efforts, and growers in Pierce’s disease susceptible regions are strongly urged to study the information provided in the links contained in this article.

Management of Pierce’s Disease in Texas

Growing Grapes in Texas, From the Commercial Vineyard to the Backyard Vine – Jim Kamas