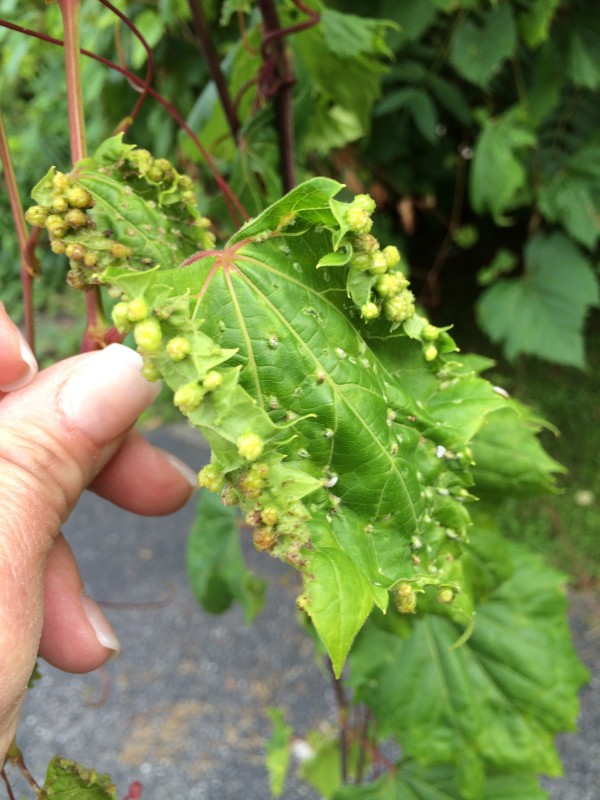 It is the time of year when our office starts receiving calls about “bumps” forming on grape leaves. While pest identification is usually quite difficult when based solely on a rough description of the symptoms, “bumps” on grapevine leaves are almost always associated with the aerial, or leaf form, of phylloxera.

Phylloxera (Daktulosphaira vitifoliae) is probably the most well-known insect pest of grapevines across the world. Phylloxera was imported to Europe from the northeast United States in the mid-1850s, and the root form of this pest devastated European vinifera vineyards growing on their own roots. Most native American grape species are resistant or tolerant to root feeding, and eventually the European grape industry recovered by replanting vinifera on resistant rootstocks of North American origin.

In addition to the underground, root feeding form of phylloxera, there is also an aerial, or leaf-feeding form of the same insect species. Eggs deposited in the fall under the bark of a grapevine are the overwintering phase of the insect. The overwintering eggs hatch in early spring, and wingless female nymphs crawl to the shoot tips of newly emerging shoots. The nymphs insert their stylets into the upper surface of young expanding leaves, and a leaf gall develops around the insect, forming a hollow growth on the underside of the leaves inside which the insect continues to feed. After about two weeks, eggs are deposited inside the galls. As the eggs hatch, new nymphs emerge from the galls through a small exit hole on the upper surface of the leaf. The newly emerged nymphs crawl towards the shoot tip and begin feeding on expanding leaves, forming new galls. Five to seven generations of nymphs (and galls) can be produced in a growing season, with new injury always occurring on newly forming leaves.

There is wide variation in grape varietal susceptibility to leaf feeding and gall formation by phylloxera. In our experience, susceptible cultivars include Aurore’, Foch, Delaware, Marquette, Frontenac, and Frontenac Gris, while galls are rarely seen on Concord and most vinifera cultivars.

In many cases, the damage caused by leaf feeding and gall formation by phylloxera are considered “cosmetic” and not damaging to the vine, and many varieties can withstand extensive galling. However, in heavy infestations, galled leaves are malformed and rolled, causing a reduction in vine leaf area and potentially reducing photosynthesis. Severe infestations can cause defoliation and retard shoot growth. In such extreme cases, the loss of carbohydrates could result in reduced sugar levels at harvest, and a reduction in stored carbohydrates to support new vine growth the following spring.

There are few insecticide options for controlling the leaf form of phylloxera. Many common insecticides such as carbaryl (trade name Sevin) do not control this insect. In New York State, there are two non-restricted use insecticides registered for control of leaf phylloxera. Movento (spirotetramat is the active ingredient) is a relatively new (and expensive!) systemic insecticide that provides effective control of phylloxera. Movento is absorbed into leaves and is translocated throughout the plant, and can control nymphs feeding inside the leaf galls. Movento should be applied at the first signs of galling, and it can be applied a second time at least 30 days following the initial application. Assail (acetamiprid is the active ingredient) is a neonicitinoid insecticide that is very effective against sucking insects such as phylloxera. Assail should be applied when galls first start forming, and then reapplied 10-12 days later.

If you choose to use one of these insecticides in your vineyard, read the pesticide label, and consult University recommendations for your state.