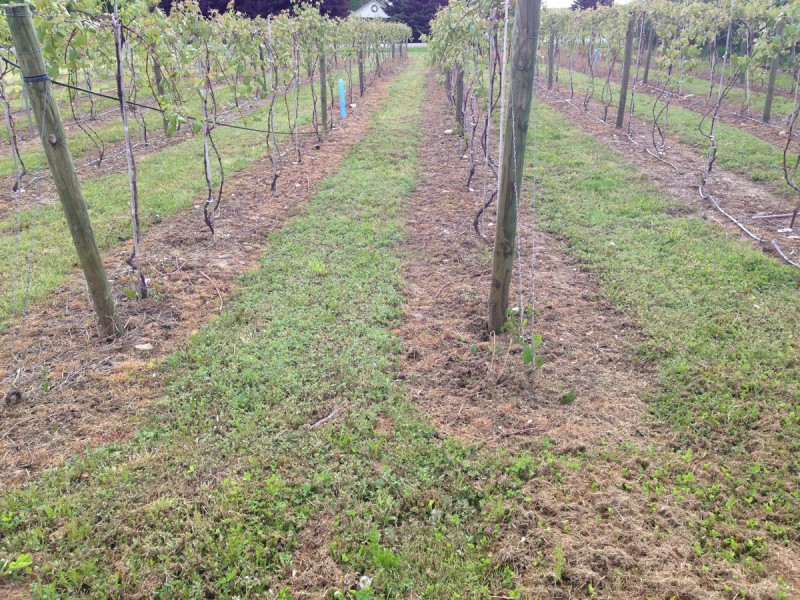 When trouble-shooting the cause of poor growth in vineyards (especially newly-planted ones) competition from weeds is one of the first things to consider. In my experience, new growers often underestimate the competitive effects of weeds in the vineyard. This article will summarize some of the concepts of managing weeds and cover crops as well as the tools used to accomplish good weed control in vineyards.

How Competitive are Weeds and Cover Crops in Vineyards?

During my career at Cornell University’s Vineyard Research Lab in Fredonia, NY, I had the opportunity to collaborate with several excellent researchers who helped me understand the concepts of weed competition in vineyards and how to manage it. Those researchers include the late Professor Emeritus Dr. Bob Pool and Professor Emeritus Dr. Alan Lakso from the New York State Agricultural Experiment Station in Geneva, NY, and viticulturist Alice Wise and weed scientist Dr. Andy Senesac who work at the Long Island Horticultural Research and Extension Lab in Riverhead, NY. The information presented in this article is based largely on their research studies and only skims the surface of our understanding of the topics, so I have listed a few references at the conclusion of this article for those of you who might be interested in more detail.

Research at the Fredonia Lab was primarily with own-rooted Concord, a relatively shallow-rooted grapevine. Studies showed that:

Concord growers typically aim to grow large crops that meet processor quality standards. Conversely, premium vinifera growers often aim for low to moderate yields in order to produce high value fruit and wine. Where high vigor varieties or rootstocks are used, vine growth can often become excessive. In the arid regions of the western United States, regulated deficit irrigation practices are often used that create moderate water deficits. These deficits can lead to improved fruit quality, especially in red cultivars. Alice Wise, Cornell viticulturist on Long Island, NY, reports that several commercial growers are successfully reducing herbicide inputs by using ground covers or mowing weeds under the vines in mature vineyards. Excessive vine growth can be tamed to some extent where vine vigor is high due to variety, heavy soil, and during heavy rainy periods. In her experience, this practice can be risky on young vines, in vineyards with light sandy soil, and during extended summer droughts, especially where supplemental irrigation is not available.

It is clear that plant growth (weeds or cover crops) under the trellis can compete excessively with grapevines for water and nutrients, limiting vine growth and fruit yield. Vineyards are primarily a hillside crop, since good air drainage and movement are needed to minimize the risk of cold damage and the development of fungal diseases. On the other hand, large areas of bare soil (especially cultivated soil) are prone to soil erosion during episodes of heavy rainfall. In most commercial vineyards in the Eastern United States, a balance between excessive weed competition and minimizing the risk of erosion is struck by maintaining a relatively weed-free band underneath the vines while maintaining green cover crops in the row middles. Typically, about one-third of the vineyard soil is maintained relatively weed-free during the summer. There are several methods to accomplish this, some more practical in smaller vineyards than in larger ones:

As previously mentioned, weeds can be very competitive with newly-planted vines, to the extent that vine growth and yield can be severely compromised. Herbicide options for newly-planted vineyards include Surflan and Prowl. Glyphosate and Forfeit can be used around young vines, but again, glyphosate contact with grape leaves needs to be avoided. The use of plastic grow tubes on newly-planted vines allows multiple applications of glyphosate during the first growing season by protecting the vines from herbicide contact while minimizing weed competition during establishment of the vineyard.

4 responses to “Managing Weeds in Vineyards”