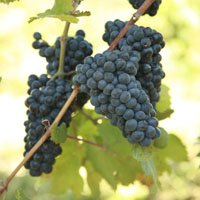 Vertical shoot positioned (VSP) training is used primarily for upright-growing cultivators, especially those that benefit from improved exposure to sunlight that minimizes summer fruit rots and/or increases potential wine quality. As compared with Top Wire Cordon (TWC) training, VSP is much more labor-intensive due to the need for summer shoot positioning, leaf removal, and summer (top) hedging. VSP training employ a fruiting wire at 30-36", and usually three sets of catch wires at 10-12" intervals above the fruiting wire. 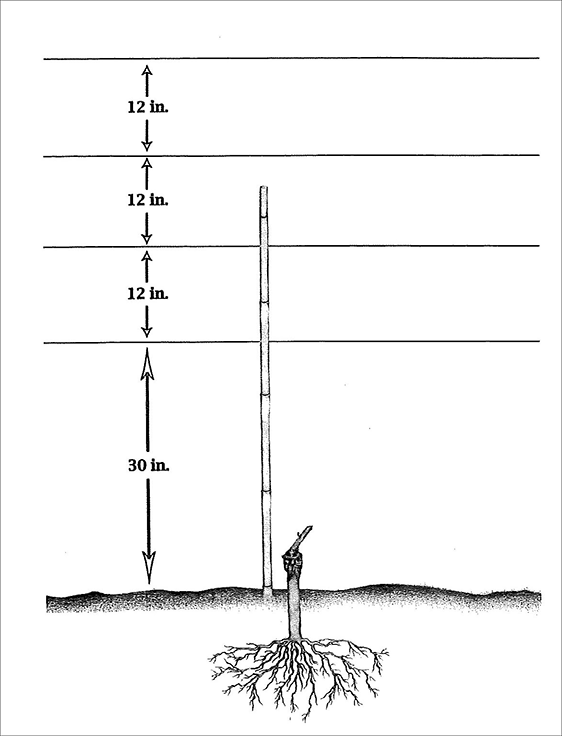 One cane is retained from the previous year's growth. This cane can be pruned and tied to the bottom wire, or a lower cane can be trained on the fruiting wire. A second trunk can be started by leaving a short spur at the base of the vine, just above the graft union on grafted vines, or just above ground level on own-rooted vines. In Year Two, crop should be limited by cluster thinning or de-fruiting in order to encourage vegetative growth. 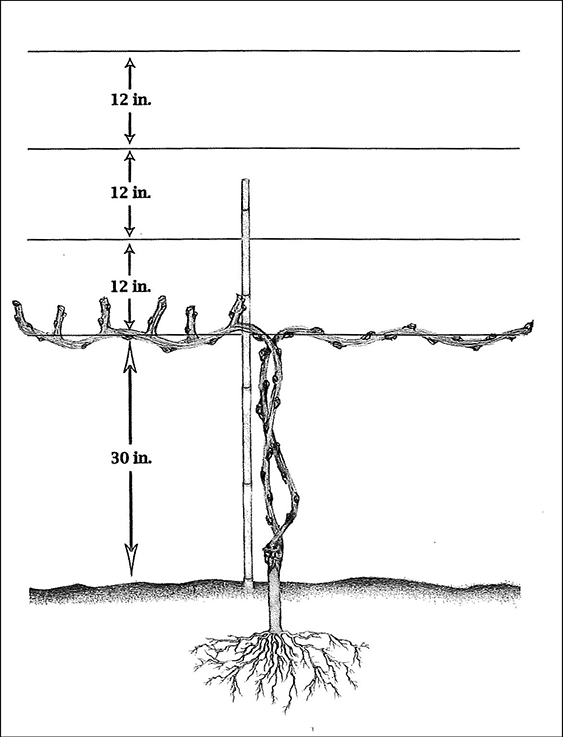 Single cane can be pruned and trained in each direction from the head of the vine for cane-pruned systems (right side of diagram), or, spur-pruned cordons can be retained for spur-pruned systems (left side diagram). In either case, three to five buds are retained per foot of row (for example, 18 to 30 buds are retained on vines spaced six feet apart within the row). Where possible, shoots emerging from cane growth below the fruiting wire should be removed to avoid overcrowding and shading at the head of the vine, but on cane-pruned systems, one or two shoots should be retained below the fruiting wire as renewal canes for the subsequent year's growth. During the growing season, shoots are manually "tucked" or shoot positioned between the sets of catch wires. Shoots that emerge through the top set of catch wires are summer pruned to encourage upright growth and minimize the shading at the fruiting zone. Third year vines should yield between one-half and a full crop, depending on the amount of trellis fill achieved. Vines that achieve full trellis fill can be fully cropped (as appropriate for the variety and desired wine quality attributes), while weaker vines may require some fruit removal by cluster thinning so that vines are not over-cropped.